House on Sorority Row: There Is Nothing Funny About a Scary Clown. 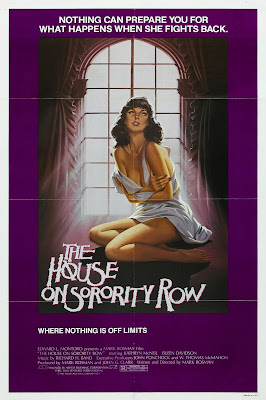 Is it weird I actually kind of enjoyed this? After being miserably let down by the likes of Prom Night, and Terror Train I was extremely doubtful that this one would do anything for me- but I was still curious. I'll be honest- that doubtful feeling didn't entirely go away until that really trippy end scene- but I'll get to that in a minute. The problem with The House on Sorority Row is that the good parts happen in the last 20 minutes which begs the question- why did it take so long to get there?
I've been scolded before for not entirely enjoying Audition. I found it to have the same sort of problem where nothing happened to wake me up until the last bit of the film. Of course the big difference is that everything that happens previous to those moments- are some what of an importance when looking at the larger picture. With House on Sorority Row however- we are chasing a Red Herring for most of the movie until we discover a truth- which then leads to awesomeness.
Sooo the plot! Sorority sister's are rebellious and against the wishes of their crazy house mother, decide to throw a huge party for graduation. After uber slut Vicki brings her man home to have sex in her super classy waterbed- house mother Mrs. Slater bursts in and pops the water bed with her sharp cane. Vicki swears revenge and decides an elaborate prank involving guns and blanks, and also maybe some fake blood exploding thingys. As with all pranks in slasher movies- this one goes wrong and the girls believe they have killed Mrs. Slater. But who let's a murder get in the way of the last party of the college years? Throughout the night however each sister slowly goes missing- each one being killed by a sharp and pointy cane....hmmmm. Who is this mysterious killer and what exactly is their problem?
I'm not sure how these writers come up with the "pranks" in these movies but they are god awful. I guess I can understand- trying to think of a Senior prank in High School was the hardest my brains ever worked- but honestly? Pretending to hold your house mother at gun point so she has to go swimming in the gross pool? I guess that's payback....? Regardless- these girls are idiots- namely Vicki who immediately decides that they can't call an ambulance and that it's really better to just hide the body. Nice work.
The kills aren't really great. In fact, they kind of suck. Half of them are barely shown to us and the others involve a really bad plaster hand or neck oozing out something that resembles blood. Most things are laughable and nothing is really scary- until the end.
I'd say it's pretty rare that I find any startling things when talking about campy 80s Slasher movies- but low and behold I was about to throw in the towel when a few things happened.
First off- Kate gets drugged- God knows why- I guess The doctor was trying to protect her and that he didn't want her to freak or something- I don't know how those things work but ANYWAYS...She's sitting in a chair tripping out- and she starts seeing these scary creepy images. The cane just floating in midair, the dead house mother just standing on the patio and then she is suddenly joined by all of Kate's deceased, water logged sisters- and they are all just standing there, staring at her... 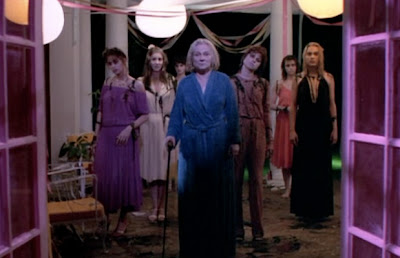 It's not that this scene was necessarily scary- but it just seemed so drastically different from the rest of the film. It was very jolting. And well I guess it was pretty frickin creepy too. The next amazing image that happened was this little ditty. 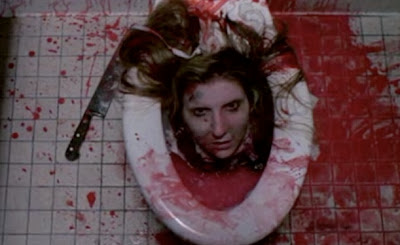 Who would have thought that after all those bad kills came this insanely awesome image? It was pretty astonishing and really frickin awesome.
Now then we have the ending and the final moment of shock. Kate is in the attic with a loaded gun waiting for the killer to emerge so that she can shoot his ass. She's standing next to a big jester doll- which she had discovered a little earlier and just shrugged it off as weird. Suddenly the jester doll pulls it's head up and a shining pair of white eyes opens. Holy crap! I was not expecting that mini masterpiece to happen- there was something so unbelievably creepy about it and I really found myself pleased.
Now the actual ending of course leaves little to be desired, and it certainly ends a little too abruptly for my taste- plus like I said most of the movie is pretty boring up until those awesome moments. So overall not the greatest- but still there is something to be said about those moments in question. Completely out of touch with the rest of the movie but still somehow creepy and even dare I say it- a little scary? I can definitely understand why they would want to remake this- but it seems like the remake was a fail. I will still be seeing it someday regardless of that- and am eager to see if they kept any inkling of those treasured moments.
One more point- the back story of the killer and everything sort of makes no sense at all. Kind of like in Black Christmas where I am extremely dubious that those girls lived in that house and never heard things in the attic. It just seemed very strange to me. Oh and also. If you found this- 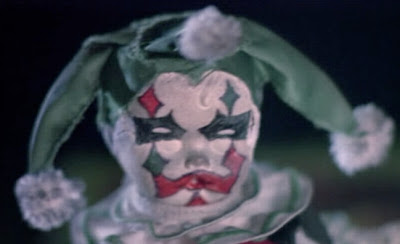 Sitting on your balcony, Right after you found a dead body- and heard weird noises outside- why on earth would you react in THIS way... 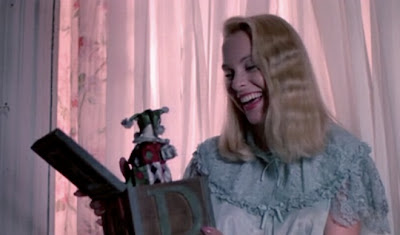 I haven't watched this movie in forever.I'll have to refresh my memory soon!

I like this movie, but was admittedly a tad underwhelmed after hearing so many great things about it being a "classic" and all. A lot of people find that jester creepy. I never have, but I guess I get it.

Haha Well I guess the only really creepy part about it- was that I didn't think that the Jester was--human sized? Previous to that I thought it was a doll- and since he's super human and would have no time whatsoever to get up there and into that jester suit made it really creepy and surprising.

I was also underwhelmed watching this. But I might give it another shot after your oh so stellar review.

Hahah nooo I only loved those certain parts- the rest was pretty Snooze worthy! Just fast forward to the end I guess.

So, the blood filled exploding thingies are called squibs, I believe. David Letterman strapped some on long ago when I still watched his show. Squib is a term for any small explosive for use in engineering, military, or other industries.

Ah, the stuff you learn on the interweb. Sad the kills and imagery didn't pick up 'til the end.

Yes! Squibs that was the word I was searching for. Thanks Igor!

I still think 'House on Sorority Row' is one of the more underrated slashers of its time. Love the clown mask as well. What're your thoughts on the remake?

I actually have not been able to catch the remake. It somehow got lost in my mind while it was waiting for it's DVD release. But you've reminded me and I better get on that!