A Tale of Two Sisters: Periods Get Such a Bad Rap These Days POP QUIZ: Which Asian horror movie is this from? 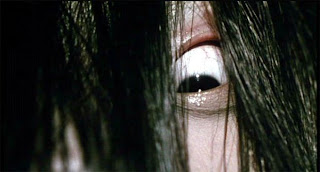 WRONG! The answer is all of them.
Sigh. Ok here is my dilemma. I know many of you love love love Asian horror namely Audition(which I not so secretly dislike) and The Ring and possibly the Grudge. My problem is that as of late every asian horror movie to come out has been less than thrilling and gives me a terrible headache and case of deja vu. Headache because you never know what the fuck is going on, and deja vu because I've seen that creepy asian girl with long hair who makes gurgling noises one too many times.
Now this isn't to say that I don't find asian horror movies scary. They all have their scary points- and let's face it- the day a scary dead asian girl with stringy hair stops being scary is the day the care bear meter falls and the world has no soul. I just think asian horror movies have been slacking and people just think they have to love them because they are the Godfather of horror movies. Personally I've seen much much better things coming from French and Spanish horror movies but what do I know?
SO ANYWAYS A Tale of Two Sisters may be the most mind boggling movie I've seen to date. I should first mention it took me about 4 tries to watch this the whole way through as the beginning has a very slow build up. Beautiful cinematography and overall images but slow as fuck. I suppose it also didn't help things by knowing the "twist" or whatever because being the plot ruiner that I am I had to read the plot of The Uninvited...but oh well.
The movie is still powerful and strong despite knowing the ending or not. What is wonderful about the movie is that you can probably watch it 20 times and still pick up on new things. I would like to go back and watch it a second time with a clearer understanding in my head now that I come to think of it- but we can't have it all.
There are several beautiful blood moments that made me swoon, as well just some really great camera work and what not. What I find to be most upsetting though is that the twist in this is too difficult to wrap your head around. Now I will defend The Sixth Sense until the end of time- and the great thing about the Sixth Sense is that the twist made sense. Going back we understand that Malcolm never truly interacted with anyone other than Cole- so therefore the twist is warranted. Here however I had the feeling I was being a bit gypped. It's like being invested in a movie the whole way through until you find out the main character was dreaming the entire time. The twist while making sense in the long run- just felt like a giant cheat to the audience- or at least to me. It's like trying to follow someone's conversation when all they talk about are inside jokes with someone else? You feel me? Didn't think so. I just am not a big fan of movies where I only appreciate them once the twist happens. I didn't really give a damn about anyone in this until I figured it out and even then it was a lack luster damn.
I understand the whole idea of everything being a part of her sub conscious/ she's trying to cope with the idea of having her sister's blood on her hands- but it was just too....messy or something. Is there really a way to fix this? Probably not. The story is flawed from the beginning. The realization of why she would be going through so much inner turmoil is very startling and heart breaking. But I felt like that realization and the emotional effect it causes is too hard to grasp after only one viewing.
Another irksome thing was the ghosts in this. I felt like this was the real deal breaker. Oh wait every asian horror movie has to have a ghost in it! Never mind! But really- there was no purpose for the ghost. There are way too many things going on here. We have a story about two sister's hating their step mother, but WAIT there is a weird ghost that gets her period on you while you sleep and WAIT again actually nothing is what it seems and none of this actually happened....WAIT WAIT the stepmother really is a cold hearted bitch? It's just too much.
Again I can appreciate the story and the images and every little thought that was put into this movie. It is beautiful it is moving but I just felt cheated and annoyed by a lot of it. I know it's probably my general dislike of asian horror movies but there has to be someone out there who feels the same way I do? Anyone?
Posted by Andre Dumas at 11:15 PM

I would suggest giving it another look. I am a huge fan of the directors Ji-woon Kim's films and they benefit greatly from repeated viewings. In the last year, I have watched his film A Bittersweet Life 4 times and it is better with every viewing. Not a horror film, but an amazing film - he also directed the more recent ode to Spaghetti Westerns, The Good, The Bad, The Weird, which was quite amazing too.

If you want to check out a film that is not just another Japanese ghost story, then I would say check out Suicide Club. I just watched it recently and loved it (look for a review soon!) Also, the French own horror the past few years...Japanese horror is a bit played out with the overflow of repetitive movies from the country.

A Tale of Two Sisters is my most favourite of Asian Horror flicks ever! The twists and turns towards the ending, things under sinks makes for squeals of delight and fright! I can also recommend Thai and Korean horror some of the Thai films will scare the pants off you!

Yeah I can't deny it's a lovely film so I should try some other stuff from him!

Thanks Matt I'll try out your suggestions!

Ms. Harker I want to keep my pants on!! Hehe. As much as I don't like asian horror they still scare me so I don't doubt their ability to scare the pants off me eeeeeek

I thought this was a lovely and very scary film.

I was lucky enough to see it on the big screen as part of the Boston Fantastic Film fest a few years ago and I think that it made it easier to digest the confusion.

I definitely had to watch this about three times to "get it", but that's something I love about film.

I loved A Tale of Two Sisters and a lot of the other Asian horror flicks in the past ten years or so (especially Ju-on), but I can easily see why people find them tiring (your pop quiz is pretty accurate and made me laugh for reals).

You should check out 2LDK. It's not necessarily horror, but it's a damn fun short flick.

You can't really blame the Asian film industry for flooding America with highly derivative films for us to remake when we keep on spending millions on them in the box office.

Tale of Two Sisters is crap - but the ghost scene where she was at the end of the bed, crawling? Incredibly, incredibly scary.

sean you said this film is crap..............you are a fucking idiot....this is on of the ten best Asian horror films out there.What don't you people get about it, Im confused now, just go watch saved by the bell reruns you fucking posers

Anonymous: That comment just got you banned from The Max for 6 months.

I'm totally edified. Thanks for this brilliant response.

I know I'm *checks watch* seven years late in responding to this (Look, I got busy! I'm sorry! My three hedgehogs aren't going to cuddle and take way too many pictures of themselves, you know!) but I wanted to stand in solidarity with you. While I appreciated the art, the cinematography, the beautiful visuals and atmosphere of A Tale of Two Sisters, it also annoyed the hell out of me for the exact same reasons it annoyed you. They didn't bother to tighten the plot enough so that, like The Sixth Sense, you could re-watch it and think "Ohh shit, I should've seen that coming!" Instead, on a re-watch, you simply get even more annoyed with it because there are a couple of scenes that make no sense at all. (Sorry, Asian horror. I gave my one "Get out of annoying Nicole by not making any goddamn sense free" pass to the Italians. So I'll cut you no slack on that one.)

Also, while I too love Asian horror (to the point where my horror bookshelf has at least a half dozen books dedicated to studies of/essays on it) but I do feel that it's become overrated and has been coasting too long on it's reputation. It WAS amazingly fresh and original back in the day and I remain hopeful that it'll get back to that. I really wish someone would make films about monsters and demons from traditional folklore of Japan, because holy hell... they have got some AMAZING monsters. I'd watch the shit out of a movie about almost any of their demons (well, maybe not the one who licks your bathroom ceiling clean if it feels you're not doing a good enough job. Though maybe there's a frat boy comedy to be made about that...)

Anyway, we are kindred spirits to be sure! I'm loving going through your archives. Take care and thanks for all the great reads and entertainment,

P.S. Note to any die hard Asian horror fans whom I may have accidentally offended: All of the above is just my opinion, and I genuinely enjoy, in an un-ironic way, both Killer Klowns from Outer Space and 80's hair band music so my opinions are clearly questionable at best. Please don't sick a long-haired, croaking ghost girl on me! D: