The Children: Snow On the Ground and No One Is Wearing a Jacket? Now I've Seen Everything! 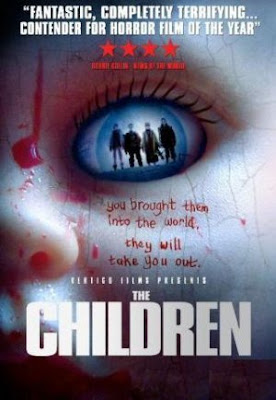 After watching several horror movies in the past 5 months or so, I have decided that the key to survival in any circumstance, is to trust no one. If your daughter has turned into a zombie- she's no longer your daughter. If your cat was buried in an Indian burial ground he's not going to be the same old cat. And if your children develop a strange illness don't think twice about slicing them up. Simple rules to follow really- but always ignored.
The Children is about 2 families celebrating the New Year's holiday together. The children soon start developing strange and irritable behavior- which ultimately escalates in complete and utter ridiculousness. They turn on their parents- and the parents are just too oblivious to realize that their children have turned evil. The film offers up the question- what do you do when your own children start to turn on you?
Right away this movie clues you into a very important fact; the children are everywhere. Running around and screaming like a swarm of beasties. It really made me want to punch a wall sometimes. Screaming kids are something I just cannot handle. So it was easy to see that everyone was pretty much doomed the moment they started reproducing. Casey- the eldest daughter who apparently was saved from being aborted while in the womb- is the obvious black sheep of the family. She wears mini skirts, has purple streaks in her hair AND wears thigh high socks. Good grief! She also has a strange bitterness towards her mother for not being able to understand the idea of contraception- and even got a tattoo of a fetus on her belly button. Plus she jokes about abortion- what a rebel!
What I found to be really creepy about this movie is the lack of explanation for why the children turn the way they do. Sure we get that close up view of the cells doing god knows what, and the occasional coughing up of blood and green vomit- but the actual cause is left very muddled. This truly makes the movie more terrifying because when there are no reasons- things are indefinitely hopeless.
The first death scene was pretty darn amazing. I meant to take a screen shot of the blood on the snow but I forgot and don't feel like finding that scene again so you'll just have to imagine how beautiful it was. I also loved the way the kids didn't seem like they were outwardly infected. Sure they looked a little pale and did some weird things but we weren't hit over the head with the fact that they were infected with some crazy disease. The way that they killed the parents still managed to be such an innocent undertaking and it was pretty remarkable. Their random bouts of laughter were both unsettling and utterly terrifying- and never truly knowing what was happening made it all the more scarier. That one shot of the little boy just standing and looking at his parents while they were sleeping? Yeah. Terrifying.
The scenes of the children dying were most likely uncomfortable to those who felt it is wrong to kill a child on the screen. But I'm pretty much immune to child killing after seeing Baby Blues. Yes it may be startling but these children were just going to kill everybody anyways! At least their deaths were justified.
Anyways- crazy and really fucked up kids will always get the better of me. As much as I hate them they have such a unique power of winning over any and all adults. As we see in the case of Casey- adults will seldom believe that a child could ever do anything as malicious and evil as the act of murder.
Best scene hands down? Ramming that stupid girl with the car. Sooooo wonderful. The ending I felt kind of meh about because I don't feel like it was necessary to leave us with that ambiguity but I suppose it was better than full out telling us. Then I would have been really angry. I guess I just feel like horror movies often get stuck in that last scare motif. I am so refreshed by horror movies that just fade to the credits after the final death scene. Why can't things just end??!
But anyways I was really impressed with this film. Lots of really great shots, some serious creepiness and some really jarring editing techniques. The film is so open to interpretation and really opens the door for some serious thinking. The movie does at times delve into this really annoying pro-life commentary. Like basically shoving it in our face that killing your children is awful and bloody and a sin. I don't know maybe it was just me but I definitely felt some agenda pushing! I guess it could also be looked at as a pro-choice commentary though....if you don't kill your children...they will kill you? Yeah I don't really get it. Someone who is smart tell me which side they were pushing!
My biggest gripe is that even though it was cold outside and I mean like snow on the ground cold- everyone was just running around with no jackets on! They didn't even look cold. Maybe the children wouldn't have gotten diseased in the first place if someone had just put on a jacket. That's all I'm sayin'.
Posted by Andre Dumas at 10:54 PM

Definitely going to see this one, maybe move it up the ol' Netflix queue a few spots.

Keep these reviews coming - they're must-reads in my book!

I only skimmed your review for the sake of spoiler avoidance, but what I read sounds great and that "rebel yell" teenager sounds hawt!

Can't wait to check this one out...thanks for reviewing it and reminding me that I own it!

Hahah I think I toned down almost all of the spoilers just for you Matt! and she IS hot but she kind of looks like that girl from joan of arcadia/sisterhood of the traveling pants...amber something or other. still hot though!

Thanks Dod I will be sure to keep them coming!

Do you mean Amber Tamblyn?! That works for me...

I live in Utah and you would be amazed how many kids don't wear jackets in winter. Some don't even bother to wear long sleeves. You will see shorts, too, as late as Christmas. Maybe like in Red Dawn it is the hate that keeps them warm. :D

Yeah, I reviewed this a little while ago.I remember being really impressed of an aerial shot showing some 'orrible tracks of blood.

Since watching this film, however, whenever my son has a cough my immediate reaction is to hit him with a shovel, which my wife is still to see the wisdom of.

Yes! Amber Tamblyn she constantly reminded me of her!

Igor...really?? That is very fascinating to me. I guess it is isn't just British people then...drats!

Hahah Igloo Keeper you are so wise!

Oh man, I think this was my favorite horror film I saw this year. I think the lack of jackets was one of the many points the movie was trying to make. You will have to discuss your "pro life agenda" take a little more in depth if you have time/inclination. I did not get that out of it at all.

Here's a review I did for it, if I may whore myself out here: http://www.allthingshorroronline.com/2009/10/children-b-movie-premise-delivers.html

It was you who alerted me to this movie I believe Chris!

As for the pro-life- I don't know I just got a feeling! Like they put so much emphasis on abortion and contraceptives and the fact that they have so many kids. And then the blatant literal killing of the children and how much pain and agony it caused them? It's probably just my overly sensitive mind to agenda pushing but I felt strangely influenced...

but it's ok because I just ignored it and enjoyed the wonderful film!

Well, I appreciate your thoughts on it. I am definitely planning to watch this again (and again) and will keep my radar up for such agendas. I'm usually pretty sensitive to that sort of thing.

Thanks for the great review!

It's really hard to pull off kid-acide in effective way and The Children does it well.

Would you be able to kill a kid or *gasp* your own child to save your own or another child’s life?

Haha what! I thought we only disagreed on one movie so far??!

Finally got to it last night, and hell yeah I enjoyed it. I'll always love a snowy set horror, but I love how Shankland found ways to do different visual things with snow and dead bits. Good stuff all around.