Session 9: So Much For Those Asbestos Being Taken Care Of! 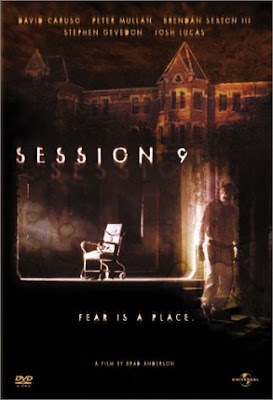 If there's one thing I've always been insanely thrilled about it's abandoned mental hospitals. You can look as hard as you want but I'm pretty sure you will never find anything as creepy. There's something to be said about the history that gets left behind. They always look like one day everyone just got up and left- not bothering to pack things up. Chairs, desks, operating tables- it's probably the eeriest thing that can ever be captured on film. You see the remains and all you can think about is what went on there.
I did a giant paper on De-Institutionalization and the effects of it on homelessness my junior year of college- focusing on an abandoned mental hospital in Northampton MA. So when I began watching Session 9 last night I felt instantly excited and even more so when the characters spoke about the history of mental illness, institutions, and the types of crimes and cover ups that happened. What Session 9 does that I find to be so remarkable- is that the atmosphere it creates makes you feel like you are trapped inside the institution as well. A cold, bitter and suffocating environment that would be very similar to the way the patients felt. After I finished the movie I felt like I was suddenly surfacing after having been underwater for an hour and 40 minutes.
The movie follows a group of asbestos cleaners who have 1 week to clean an abandoned state hospital. They are led by Gordon who suddenly became Scottish somewhere after 10 minutes, and Phil aka CSI Miami guy. 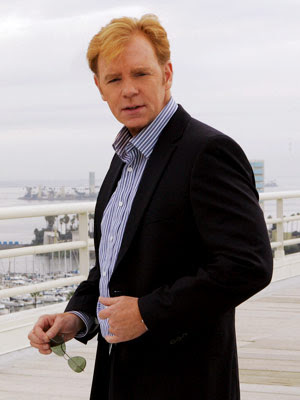 Don't let CSI Miami guy worry you- because although his ginger-ness will never fail to creep me out- it didn't take away from the movie. The men soon find that the hospital has a way of unleashing our darkest side- as old histories are dug up and new ones are created.
There aren't a whole lot of jumps in this movie- in fact there may be none. All the fear and terror is- as it should be more of a psychological and deeper fear. To me one of the scariest parts was when Hank found all the coins and gold- and then the camera panned out to reveal that he was digging out coins from a crematorium. Yuck.
Then the part that made me insanely scared was when Mike started listening to Mary's sessions. The first time you hear that other personality start talking really shakes you- and then when you hear Billy's voice....and finally Simon's....good god. Multiple Personality Disorder is one of the most intriguing forms of mental illness. The fact that the patient has buried their past so deeply in themselves- deep enough to form other thinking and talking personalities is incredible. A lot of people like to believe that Mary was supposed to be possessed by a demon- Simon- but I think that's a load of crap. Simon is just as he says the part of us that controls us when we are weak minded. There may be no ghosts in Session 9 per say but the word ghosts has so many meanings and this movie really seems to tackle them all.
I liked how we instantly know something seems weird with Gordon. I also love how Gordon and Mary's stories link up with each other in that way. While I kind of felt that the twist or ending was pretty obvious within the first few minutes it was still a pretty big blow to find out the extent of what went down. I wasn't crazy about Simon talking to Gordon ala Frank in Donnie Darko- but it didn't ruin anything for me.
Overall the movie is truly powerful. If you are in the mood to have a good, restless night then give this one a watch. There are so many levels to it and so many ways of interpreting it that it kind of hurts my head. The hospital becomes a character of it's own, and it's presence is felt the moment the movie begins. I wish I could go deeper into theories but I don't want to spoil anything for the Session 9 virgins! Oh and wasn't it spectacular that the CSI Miami guy AND Jim Brass from CSI were in the same movie!? AND Warren from Empire Records....egads!
Also Mike is kind of a babe. Ok that's all.
The "Fuck You!" at the end of that scene will never fail to crack me up.
Posted by Andre Dumas at 7:39 PM

I'm glad you liked it.

The one shot of the figure appearing at the end of the hall in that basement area is still one the creepiest things I've seen in the last 10 years.

Did you see the stuff about the homeless woman they cut out? A lot of the weird stuff that happened (noises and figures and such) was just from some homeless woman living in the place. All I can say is I'm glad they cut it out. I don't think I would have liked the film as much.

Technical trivia: This was an early shot on HD film.

I did read that about the homeless woman. It seems like it would have a major deterrent from the movie's overall impact. I am also very very glad it was cut out- apparently it was because everyone thought the homeless lady was Mary.

Which goes back to my problem with people being convinced that Simon is a devil and that Mary only did those things because she was possessed. It's like people can't fathom that someone can do terrible things so they always try to blame it on someone else- Which funnily enough is one of the exact reasons people develop multiple personalities in the first place! How thought provoking!

"I live in the weak and the wounded...Doc"

Such an incredible film. Tense and atmpsperic throughout, and so much about how easiy it is for anyone to one day just snap under pressure.

While I love this movie, this is the hardest kind of horror for me to endure. This is very creepy and eerie, but it scared me the most after I was done watching it. The movie gets stuck in your head. I kept hearing those damn voices, and had a lot of difficulty sleeping. I still however watch this quite often so go figure. I love how you refer to Caruso as ginger...priceless!

I was working with a friend for his horror site (dreadcentral.com) after we watched Session 9. We made a few phone calls and arranged a guided tour around the grounds of Damvers State Hospital, and because we were so "well behaved", the guide/guide decided to "go back to his trailer to check in" and said he'd be back to the spot in 30 miniutes. And "wink" don't go inside the hospital through that loose window board over there. We got a lot of great pics inside. And I can say it was oneof the scariest places I have ever been inside of. Very heavy feeling of dread. Sadly it is now been turned into townhouses...Blah for forward development...:)

Mesothelioma is certainly such an regrettable disease, and really might well have been avoidable had most people recognized back then what we understand now. It is also a pity that many folk get irritated about the mesothelioma cancer commercials on television, but those affected have to be paid for fairly IMO.