Opera: The Killer Could Have At Least Provided Some Eye Drops 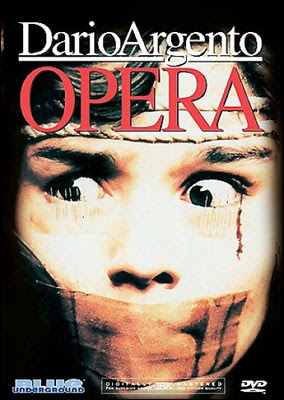 Usually with any Dario Argento film that isn't Suspiria, I find that I have some burning questions. Opera is no exception to this, especially in the last few minutes... That doesn't mean Opera isn't a a great movie but it does mean that I said the phrase "...what the fuck" many many times.
After a strange accident the star of the Opera version of Lady Macbeth is badly hurt. Betty a young and upcoming opera star takes her place and is soon stalked by a strange fan. This is no ordinary fan though...this fan kidnaps Betty, tapes needles under her eye and forces her to watch while he kills her friends. We soon find that the killer knows a dark secret relating to Betty's past, and also that nothing stops him- not even a raven pecking out his eye.
Now what is pretty awesome about this movie is the killer's needle tape. He lines up all these little sewing needles and explains carefully that she can't close her eyes and MUST watch while he kills. Turns out she can close her eyes it just hurts a lot when she does. I will tell you I did not envy Betty at that moment because A. that would hurt and B. She has to close her eyes at some point because it's impossible not to blink when your eyes get all dry. In a Clockwork Orange they at least had the decency to give Alex eye drops, but no no here the killer is a little too frugal to offer such kindness. Well that and he's a killer.
The kills were OK but there also wasn't a lot of beautiful blood moments, which I found strange. The camera work was very cool however- the "raven cam" while sometimes nauseating was unique and quite exciting. I also loved the back story of Macbeth and the "curse" of doing the play or in this case the Opera. Betty was kind of annoying however and I didn't get why she just jumped back on her feet and fled the murder scene after the killer was done. She seemed genuinely unmoved by what happened with each murder even though she was forced to watch everything. Not to mention she had needles under her eyes. I'd be running for the high hills if that happened to me, I would NOT be walking around creepy costume rooms and waiting for the killer to grab me and have it happen all over again.
I think sometimes with Argento films the whole backstory of why the killer is doing what he does sometimes gets a bit lost amongst the amazing camera work. We get a brief flashback every now and then that tells us absolutely nothing, and the killer sums up the story briefly but that's pretty much it. This makes the identity of the killer unimportant because it could literally be anyone and it wouldn't even matter. We didn't know the killer was a part of Betty's life beforehand and and neither did Betty- so why should we be interested in the outcome?
The whole ending part of the movie was also a major confusion. Starting with how the ravens were the key players in capturing the killer. That was the director's big plan? Let the ravens loose and whoevers eyes they peck out is the killer? Sounds pretty dodgy to me. Don't worry though because the ravens knew EXACTLY whose eyes to peck out. So phew.
And then we have the ending. I'm not sure what that was about but suddenly Betty turned into a nature loving hippie weirdo. There was even a strange lizard roaming around, and it just kind of ended. Didn't her director just get stabbed a lot? Why is she busy rolling around in the grass and talking to a lizard?
So despite the story being pretty damn cool I just felt like all the confusion was really distracting to my viewing experience. Like who that little girl was and what was her purpose in life, not to mention her slut-bag mother and her connection to the killer. Plus I would have just loved some details of Betty's mother past and what her issue was. The no escape music was pretty amazing, the ravens may have been my favorite characters, but I just felt like it was missing something. I had more burning questions...but now I forget them...hmmmm nuts.
Buy Opera At Horror Movie Empire!
Posted by Andre Dumas at 12:36 PM

I actually really enjoy Opera. I think it's one of Argento's best. I didn't find the plot all that confusing compared to most of his work. While the killer's motive is convoluted (and the main character's back story as well), I thought it made sense in the end. This definitely has its share of iconic moments and camerawork though!

You are right it did make sense in the end but I still got that rushed feeling to put all the pieces together by the end!

I still can't figure out those darn ravens though!!