Invasion of the Body Snatchers: The 2nd Biggest Threat to Civilization--Next to Zombie Sharks 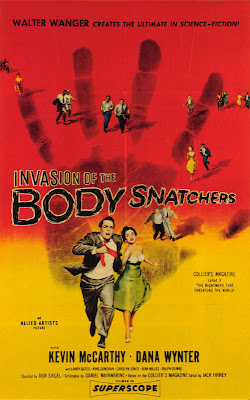 What a treat I found when I woke up a tad too early this morning---The Invasion of the Body Snatchers on TCM! The movie is a classic case of you against the world. It's one of those movies that makes you take a second look at your friends and wonder if they've been secretly replaced by a pod person. And then it goes one step further and makes you wonder if the entire world is compromised of pod people and that you are the only sane one in the bunch. This way of thinking is not far from my all time paranoia thinking that the whole world is in on the plan and you aren't aka The Truman show--which when that came out I almost shit my pants. I was positive someone was trying to send me a message and that my Batman poster was hiding a secret camera!! From that moment on I always changed my clothes in the closet. Whoops ANYWAYS The Invasion of the Body Snatchers is terrific.
The people in the town of Santa Mira are acting strange. Several townspeople have been complaining that their significant others are not who they say they are. We follow Miles whose voice over work is entirely charming although sometimes confusing. We soon find that a number of the townspeople have been turned into emotionless clones with no fingerprints. Miles and his sweetie Becky soon start to realize that the whole town is being taken over! How will they rid the town of these pod people? Will the pod people take over the entire world? Are the pod people still around today?!!
Movies like this tend to freak me out a little more than movies about ghosts and serial killers. The scene where Miles and Becky are in that apartment and watching all the trucks line up with the pods is so freaky to me. Not to mention that if you close your eyes for like 2 seconds you'll be turned into a pod as well!! The moment where Miles realizes Becky has fallen asleep and that she is no longer herself is actually one of the most heartbreaking scenes I have ever seen. Becky, like Glen Lantz fails any chance of helping out in the fight against Fred Kruger er- the pod people I mean. Big BIG way to go moment there.
The scene where Miles witnesses the pod stuff coming out and forming a person is also very disturbing. Poor Miles. There's no way he can win. He's all alone in this world now. Actually he's probably a pod person by now. This wonderful film really makes you question who you can trust in this world. Much like The Thing, imagining a solution or ending to the problem is entirely bleak. Aliens have a way of getting what they want I suppose. Bastards.
Buy Invasion of the Body Snatchers at Horror Movie Empire!
Posted by Andre Dumas at 10:01 PM

Love this movie too. You pointed out all of the strengths of it so no need for me to repeat it.

I will say though that while I do love this film my personal favorite is actually the 1978 version with Donald Sutherland. If you haven't seen it I suggest you check it out. To me it's even creepier and much more effective.

Whatever you do, DO NOT watch the Nicole Kidman remake, the Invasion. First, I had no idea it was a remake until about 30 minutes in and second, its one of the worst movies I've ever seen and completely bastardizes the original story.

I have a feeling I would enjoy the Donald Sutherland version as well Gory. Because...I LOVE the Donald. I'm getting Don't Look Now soon (probably marks the 3rd time of watching it) so I'll have to give myself a few days of rest before another Donald masterpiece can be brought to my attention!

eeeeks! I have been warned elsewhere I think not to watch the Nicole Kidman version so don't worry I will stay far far away!

An almost perfect film. Would have been perfect if they had gone with what was going to be the original ending - which was the scene where McCarthy is stood in traffic shouting “THEY’RE HERE ALREADY” and we get a close-up shot of him looking into the camera.

That would have worked better than the happy (ish) ending we get.Never mind though.

Great post on a great flick! As others have said, the Sutherland remake is worth seeing. I'm also a fan of the cheesier Abel Ferrera remake, but I'm in the minority there.

Hmmmm I did read about that looking into the camera thing and was so confused because I didn't remember that part...That would have been awesome! And it would answer my question- proving everyone is a pod person except me.

Love this movie! And I have to say, I heard horrible, horrible things about the Nicole Kidman/Daniel Craig version, but when I watched it (expecting it to be total trash) -- I actually really liked it. It certainly kept my interested with its suspense and the way the plot unfolded. But I also liked The Village so go figure ;)

The Mike - I like the Abel Ferrera one too. It has one shot in it that the first time I saw it literally freaked me out the hair on my arm stood on end.