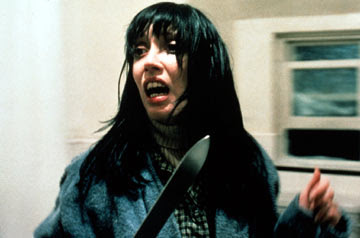 There is no easy or polite way of saying this, so I guess I'll just man up and say it. Wendy Torrance- is ugly. Between her constant annoying questions, terrible fashion sense and overall ugly face I am just not sure why Jack Torrance even married her in the first place. What did those two ever have in common? After sitting through The Shining, it becomes very apparent why Danny developed that little habit of talking to his "friend" Tony. I too would invent an imaginary friend that lived in my mouth and talked through my finger if my mother was Wendy Torrance. Does Danny even like being called Doc? Maybe you should ask him.

It has always been my personal belief that Jack Torrance would have been just dandy- had Wendy not been there. She's always pestering him- holding useless and awkward conversations about nothing and worst of all- interupting Jack's very important quiet writing time. She's as useless as a sack of poo- although even a sack a poo has fetilizing capabilities so even that one ups her.


Wendy really did her part to make sure her family fell apart during these hard times. This includes blaming Jack for beating and strangling Danny when it was quite obviously the rotting old naked lady in the bath tub. Don't you know anything Wendy? Jack would never hurt his own kid- (except for that one time when he pulled Danny's arm out of his socket...whoops!) Who can really blame Jack for wanting to chop Wendy up into a million pieces? All I need is one look at that face and I'm off to go kill a baby. Way to go Wendy- your face has ruined everyone's hope for a happy life.
Posted by Andre Dumas at 2:27 PM

Another great entry in my favorite ongoing series There always was something about Wendy's voice that nearly sent me into fits, like Kramer with Mary Hart's voice. Great stuff again!

And the winner is ... Wendy in her Chewbacca costume.

Now I don't feel so bad for finding her to be utterly unsympathetic. I shouldn't root for a character's death so enthusiastically ... then end up disappointed.