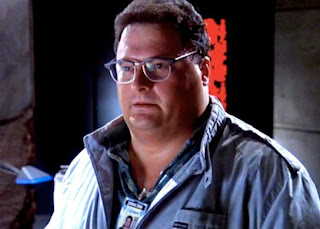 Dennis Nedry pretty much stands for everything that is wrong with this world. He's lazy, he's fat, he's ugly and he probably has Cheeto fingers. 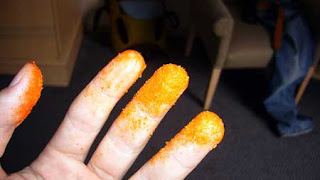 ....Yuck. Anywho, thanks to Dennis, and his desire to make a buck, things go from bad to worse at good ol' Jurassic Park. He shuts down the main power so he can break into the embryo storage and steal some dinos. This in turn allows for Mrs. T-rex to get out of her pen and reek some serious havoc on the annoying children. Even though I had hate that little girl with a passion, no one really deserves the hell they went through in that Jurassic Park....except maybe for Dennis Nedry.
Anyways, Dennis then tries to make a hasty escape hits the sign that points to the dock- and then put's it facing the wrong way! Genius move Newman really. So then he crashes his jeep and finds the scary ink spitting dinosaur and meets his demise. The last we see is the can of embroys being washed away....so basically Dennis Nedry caused all this chaos for NOTHING. Way to go Dennis
Then of course no one can get into his computer because they don't have the password. And he's got candy bar and junk food wrappers everywhere and it's just not a good environment for anyone. He single-handly is responsible for pretty much everything that went wrong. He even killed dinosaur embryos...what an asshole. Try putting a little dignity on next time Dennis.

Nice review. I saw this movie when I was really young in the theater (3rd grade) with my parents and little brother (1st grade). I remember being really scared, but also so amazed at how real the dinosaurs looked. No one had any idea what the movie would be like because all the previews we saw simply said Welcome to Jurassic Park - or something like that and then you heard a T-Rex growl. It was so cool.

The one big thing to say about seeing it in the theater as apposed to on TV was how loud the T-Rex sounded. This was back in the day when surround sound started to become standard in theaters and hearing that thing growl after stepping out of the pen - oh my. Needless to say my little brother disappeared into my parent’s row right after that.

I too saw it in the theater and it was probably the most frightening thing that could have ever happened to me.

Check out my actual review of the movie, we have similiar feelings about this movie and it's effect. Also I still have not seen better special effects than the ones in this movie. And I love dinosaurs so it's a win win situation.