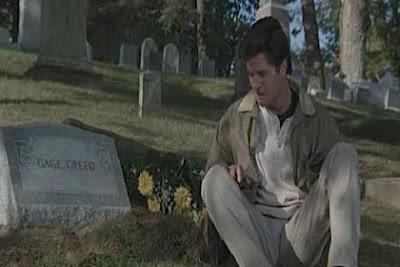 I'm not sure what planet Louis Creed is suppose to be from- or more importantly- how he ever became a doctor- but when a kooky old man tells you NOT to bury your dead son in an indian burial ground you should probably listen. Not to mention a dead guy with a pretty nasty head wound is also constantly warning you not to do things. Now it's not like Louis didn't know what the burial ground would do. He did bury his daughters dead cat after all-because it's obviously wiser to give your daughter a rotting and mean zombie cat instead of telling her that it died. Honestly after seeing that zombie cat in action why would you ever consider burying your son in there?!! 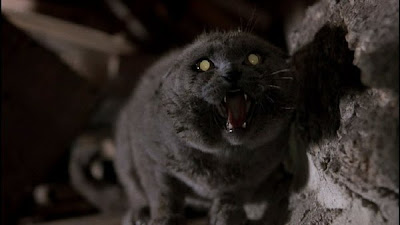 So numb nuts over there decides to not tell his wife that he plans to bring back Gage from the dead and what happens? Oh right Gage Creed becomes an evil devil child who kills nice old men and his mother. Way to go Louis Creed. You really think with your head. Let's not stop there though. Let's bury your wife too! I just have one burning question Louis...was your wife a better kisser before or after she died? 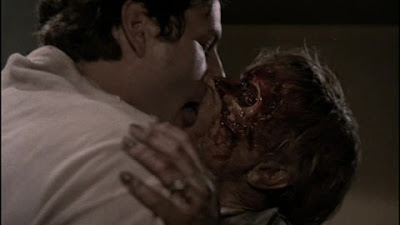 I like this. I haven’t seen the full movie yet, but I read the book, which was really good and remember being pretty frightened of the cat whenever I saw the previews as a kid. I’ve heard this one does a pretty nice job of staying true to the Stephen King novel, so I think I will have to finally sit down one day and watch the entire thing. I just always hesitate on doing that when I really, really liked the book.

It is a pretty decent movie, and I was really surprised I waited so long to see it. I've never read the book but I think in these cases you just have to separate yourself from the book and the movie or you'll go nuts. Ya know?

The scene with the mother's flashbacks to her diseased sister are probably the scariest thing I've ever seen though!