Wrong Turn: Cross West Virginia Off Of Your Places "I Want To Go" List 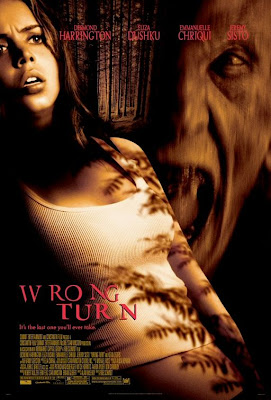 I have to say I think I'm getting very tired of the cannibal hill billy plot. The hill billies in Wrong Turn are like a cross breed of The Hills Have Eyes clan, the sons from Mother's Day and syphilis. That doesn't mean that this movie isn't entertaining- but things certainly get a little old by the 8th time the blonde hill billy tries to kill someone with his axe.
I did enjoy how this movie had a "first kill" I feel like more recent movies have kind of forgot about that pattern so it was kind of surprising to see. Not that it was anything special- it looked more like a rip off of the beginning of Jurassic Park but I did like how the guy's blood was dripping on the girl, ah blood rain!
ANYWAYS the plot is; some rabble rousers are stranded in the woods in West Virginia and fall prey to some cannibal hill billies. Did I really have to tell you that? These hill billies even pull the same barb wire trick to cause a flat tire gag that the Hills Clan employ. The group heads off in search of help and of course stumbles upon the hill billies house. As if the smell of rotting flesh, 10 year old poop in the toilet (FYI I just found out that I've been spelling "toilet" wrong for 15 years...ballz) wasn't enough to clue them into the fact that they walked into trouble- sporty spice decides she needs to use the bathroom...! Pfffft. What really gets me about this scene is that Elton from Clueless makes a joke about how he saw the movie Deliverance. I'm sorry but if he saw the movie Deliverance they shouldn't even be anywhere near the woods. However the scene where they are hiding under the bed watching their friend get hacked up IS pretty decent.
What isn't decent is a list of things- starting wih how boring the hill billies are. They don't really do anything particularly disturbing. We don't even see them eating anyone- despite all the flesh they've got saved up in their fridge. On a side note shouldn't all that meat be in the freezer if they aren't going to eat it right away? Clearly they don't care much for hygiene but rotted human flesh can't be good for anyone.
The worst part of this movie for me however was how annoying the not Eliza Dushku girl was. Yeah you're friends are dead. Suck it up and stop being such a bitch about things. I honestly would have just pushed her into the bear trap and peaced out on her.
The other really strange part was when the doctor guy latched onto the bottom of the sheriffs car and rode like that to the hill billy's cabin. I don't care if he's a doctor nobody can do that except James Bond...and possibly Batman. If he was really shot in the leg I doubt he would have made it more than 10 minutes. All I'm saying was that he was a little too Captain America. I would have preferred that Eliza Dushku could kick ass without the assistance of his macho-ness.
And the ending was a little too much. Those frickin hill billies kept popping up like a bad pimple. And why god why did the doctor not grab the sheriff's gun? Ugh. Plus that burning truck lasted too long without exploding.
I did like how there wasn't an unhappy ending or a last scare from our friendly neighborhood hill billy scum. Honestly if I saw a hand emerge from that blaze I was going to throw my computer out the window.
Sorry if I'm being harsh but this movie just wasn't anything special for me. I just felt like if they were going to reawaken the homicidal hill billy thing it needs to be different and possibly taken up a notch. Nothing made me uncomfortable or even made me flinch. It's the same old characters not heeding the golden rules of back woods vacationing. Which are; bring lots of guns and never trust that a cop will rescue you. Cops are always useless.
I suppose it is entertaining to a point but I'm just craving for a horror movie that's not built on the back of a previous smash hit.
Dear Originality
I miss you.
Love, Andre
Buy Wrong Turn at Horror Movie Empire
Posted by Andre Dumas at 6:59 PM

Yeah the original was generic Hollywood unoriginal horror but the sequel was actually not too bad.

Like I said in my review of Wrong Turn 3 cannibal redneck films are like moonshine...its nasty its vile but its somewhat tasty.

haha ooooh so very true! I am looking forward to seeing the 2nd one actually because of your review! Oooh those cannibal rednecks!

..I do not like this film at all..I do not like cannibals horror in general, and this one got boring too soon. I agree with you regarding the first kill, during the free climbing (I actually AM a free climber, ugh!!!) , but the rest of the film was not worth it.. I actually couldn't get to the end..just fell asleep before it did..