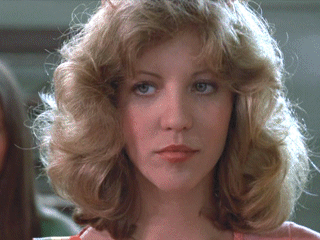 Chris Hargensen has one of those faces that you hate. It's scrunchy and stupid and just plain obnoxious. For starters- she's a bitch. It pretty much goes without saying that she is the leader of all Anti Carrie White groups that have taken over the school. I would also fathom a guess that she snuck into school one night and spray painted "Carrie White Eat Shit" on the walls. It pretty much goes without saying that she was a hop skip and jump away from joining the Ku Klux Klan. So what if Carrie White is quiet and a little weird? YOUR best friend is a dumb ass who always wears a red baseball cap. Real cool Chris.
Chris is such an obnoxious bitch that she refuses to be punished for being a complete asshole to Carrie therefore forfeiting her prom ticket and inadvertently causing the death of everyone at the prom. Think of it this way; if Chris had just sucked it up- Carrie would have had the happiest night of her life and probably would have summoned the courage to finally get rid of her psycho mother. But no no- she has to hold a grudge and perform the evilest most vile form of payback known to man. I'm not sure where Chris grew up- but unless she grew up in the devil's anus- payback should never include dousing a girl with a bucket full of pig's blood during her prom queen crowning. Real funny joke Chris.
Due to this "prank" Carrie goes nuts and uses her weirdo powers to kill everyone. Once again this little tragedy could have been avoided if Chris had just done a few more sit ups. Way to go Chris. Everyone is dead and it's all your fault. Now the only kids left in town are the loser's with no dates and that curly haired sort-of nice girl. GREAT!
Posted by Andre Dumas at 8:04 PM

And yeah, I guess the only kids left in town now are the nerds who didn't go to prom! Good for them!

Hargensen...not Hendrensen....you have it both ways, maybe it's a pun of some kind?

Hmmm I did not notice that, thanks! Must have been tired this day...hehe