The first time I watched The Thing I thought the dog was a goner at least 30 times. Being the animal lover that I am I was at first relieved but then I realized it was probably best that the dog bit the big one. Thanks to that dumb Norwegian though, the dog escapes and The Thing takes over the entire US research station. I know you're a scientist but come on, at least try to get a decent shot out. It's not like the dog had super alien speed or anything he was running across snow for gods sake. They should have flew down in the heliocopter jumped on top of the dog tackled it and then shot it. Ok I guess that's a little extreme but honestly have you ever seen a worse shot? Even Harry Dunne from Dumb and Dumber is a better shot than this guy. 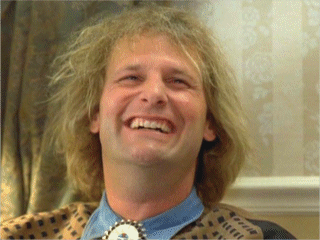 So anyways thanks to this Norwegian, The Thing runs amok, enters the camp and pretty much wipes out everyone in the camp, PLUS the normal dogs. It's also no surprise that the Norwegians are the ones who dug up and defrosted the thing in the first place! Let's just leave alien life forms alone from now on please? You could blame Garry I guess, but he was just trying to protect the life of what looked like a sweet innocent dog. Well that and the Norwegian kind of shot Bennings in the leg by accident- once again worst shot ever! A serious way to go on this one Norwegian guy with bad aim. Next time just shoot yourself... if you can.
Posted by Andre Dumas at 6:25 PM

Very true, the Norwegians don't know how to use a gun but I usually pass it off because the helicopter is probably being driven by somebody who doesn't know how to drive on... therefore, making it hard to aim. :)

Hmmmmm Well I SUPPOSE. They still could have helped things out by not digging up the thing in the first place. Worst scientists ever.

I know I'm like a year and two months late here, but I'm trolling through the archives.

I never understood why he was shooting at it. Is there anything in the movie that indicates that The Thing can be harmed by someone shooting it? No. Is there any indication that the Norwegians already knew this? Yes.