The Woods: AKA Harry Potter and the Fire Crotch. 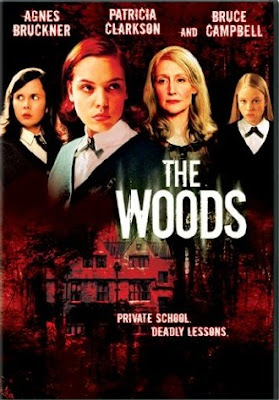 The Woods is by all means a borrowing of a sort to the likes of Suspiria where a private girl's school is really a disguise for some kind of convent of witches. The Woods however is really confusing and somehow seemed like an excuse to use Bruce Campbell in a horror movie. It follows the story of a girl named Heather, nicknamed "fire crotch" by an especially malevolent classmate who has been brought to this school by her mother. Things immediately don't seem right as the teachers are all a little too rigid and sometimes have leaves in their hair. They make Heather take some weird test, and make up stories about students gone missing. There's also some legend attached to the school about 3 witches that possessed the students and made them kill the teachers...I wonder if it's true?
So blah blah blah Heather just so happens to be the third and final key to the 3 witch sister's plan to unlock their family's spirits from the woods...or something like that. To be honest the plot was a little too confusing for one person to digest after just one viewing. Although confusing plots that make you want to watch the movie again to understand are OK by me, this movie isn't really interesting enough to warrant that second watch.
The film also has a strong resemblance to a few of the Harry Potter movies. Why you ask? Well let's see.....
1. Heather hears a strange whispering in the walls when trying to concentrate. Perhaps she is a parselmouth? 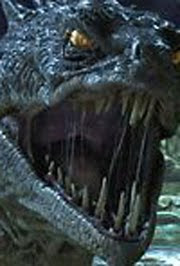 2. When trying to leave the school with her mother and father- Heather's family gets attacked while in their car by a ravenous tree..... Whomping Willow anyone? 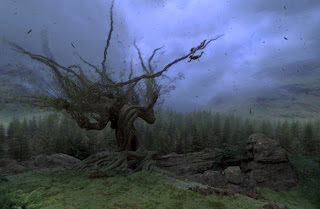 3. When Heather tries to break free of the branches that are pinning her down, the headmistress says "do not struggle they will only grip you tighter" Sounds to me like Heather is dealing with a bit of Devil's Snare.

4. And finally; Heather is nicknamed Fire Crotch and well...... that's pretty self explanatory. 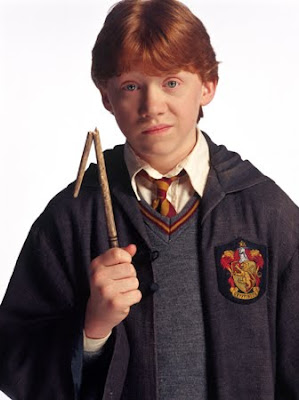 So all in all the movie wasn't that bad, it just really didn't bring anything new to the table for me. Sure there were some good moments like creepy voices, creepy songs, and trees that have blood- but overall nothing really stood out here. The plot was confusing, there seemed to be a lot of anachronisms especially the girls' uniforms, and the don't drink the milk scenario hit a little too close to the wine situation in Suspiria. Plus the vomiting of mud and leaves was gross. And Bruce Campbell was kind of lame. No offense Evil Dead fans.
Buy The Woods at Horror Movie Empire!
Posted by Andre Dumas at 2:33 PM

You're awesome for comparing this to 'Harry Potter!' I thought I was the only one!!

hahah no way the similarities are pretty apparent I think! We can't be the only ones! : )

I like the comparisons to Harry Potter. I also know I’ve seen that pencil standing straight up due to witchcraft somewhere before in a movie, but can’t place it. I even think they were wearing schoolgirl uniforms as well in the movie I’m thinking about and that it took place in a classroom. Any idea what movie that was?

Yup, it's in The Craft. Which is a splendid movie. This movie definitely borrows a lot from the Craft that's for sure.

Best post title ever!
Incidentally, I just bought this movie for 3 bucks a few days ago. I saw it a while back and remember liking it enough, but I honestly do not remember a thing about it outside of the fire crotch chick.

The guy that directed it is Lucky McKee who was also the director of May, a movie that I quite enjoyed and you should check it out if you haven't.

Lastly, I think The Craft is a great movie too!

haha Thanks Matt! I will check out May actually as I have been staring at it on my Netflix watch instantly queue for days.

I LOVE the Craft...my friends and I used to be obsessed with it- and the part where Nancy's boots drag on the floor before she pushes Chris out the window is still one of the scariest images I have etched in my mind.

ahh, firecrotch. the expression on ron weasley's face, along with broken wand... haha too much. i love him forever. and also you should compare everything to harry potter. AND i love the craft