Aliens: For a Limited Time Only The Horror Digest Will Be Renamed To- "Listen to Ripley" 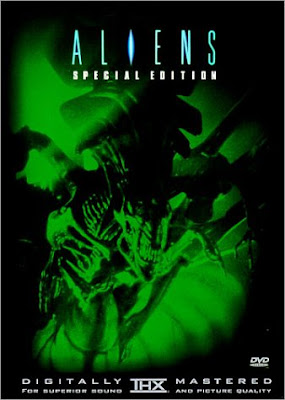 Isn't "Listen to Ripley" the best name for a horror blog? If I had a bigger appreciation for Sci-Fi and the Alien movies I would be changing my blog's name right this very minute! But seriously--the entire cast of both Alien and Aliens gets a collective "Way to Go Moment" on this one. RIPLEY IS ALWAYS RIGHT. What's that? You want to quarantine Kane so he can't unleash the alien on board the ship? Silly! Huh? A crazy alien attacked your ship 50 something years ago you say? Ridiculous! We should leave this area swarmed with aliens immediately??? Never! Seriously. What the fuck.
Personally I love Aliens. While Alien may have been one intense build up and had the ability to fill you up with horrible feelings of claustrophobia, dread and being trapped in space---Aliens supplies you with fear, scene after scene. Plus- Bill Paxton says "fuck" a lot. And Jonesy still lives. Yes!
Ellen Ripley is our distressed hero- plagued with horrible nightmares and post traumatic stress syndrome following her experiences aboard the Nostromo. In present day- mere minutes for Ripley but a staggering 57 years in reality- Ellen Ripley discovers that by destroying the Nostromo she has wasted a lot of money. No one really believes her little "alien" story- and why should they? It's not like science is so evolved now that we are able to fly through space....seeing phased plasma pulse rifles being used in the military is one thing but real live aliens? Say what?!
Anywho- it turns out a colony has settled on the very same place where the face-hugger eggs were- and the funny thing is the colony has lost all contact with the outside world. Hmmmmm. They recruit Ripley as a consultant- and Paul Reiser as a useless lawyer- add a bunch of douchey futuristic army kids and send them on their way. Upon arrival the crew eats their words about there being no such thing as aliens- and soon find themselves being digested by however many little heads and stomachs those beasties have. But fear not- Sigourney Weaver as a triumphant lesbian fans- Ellen Ripley is back to kick some major ass...even if it takes her a little while to get there.
When James Cameron (Or Jim as he apparently likes to call himself on the commentary) was given the option of filming Aliens without the presence of Ellen Ripley he promptly shot down the possibility. And rightly so- as Aliens is Ripley's movie. To see her go from traumatized survivor who is jumpy at the touch of someone's hand- to fear conqueror, guns blazing, no holds barred crazy biotch, is pretty damn miraculous. Plus she picks up some motherhood skills when she takes care of Newt and who doesn't love full frontal character development?
But for real...the suspense in this movie was killing me! Once you watch Alien over and over again you start you smack your head for not noticing that the alien was in the shuttle with her the whole time. Which then means- when you watch Aliens- every single piece of slimy icky gooeyness or hanging space debris looks exactly like an alien and you start to panic. As soon as the army a-holes were in that colony I was like- oh my god it's right there! Right there! But it wasn't- it never was! And then of course one pops up later disguised as part of the ship right when I put my guard down! Bollocks.
Plus the fear in this movie is magnified by 1,000- only it's a much different kind of fear. It's a panicky fear, whereas in Alien it was more of an overwhelming sense of dread. That scene where all the aliens start waking up- and later when the guy sticks his head in the roof-ish area and sees them all coming? Holy crap. An entire ship's crew couldn't deal with one of those beasts- but an entire swarm- or colony? Forget it. I almost had a minor seizure when we saw all the dead bodies trapped in the alien goo... and then there is of course the face hugger scene- 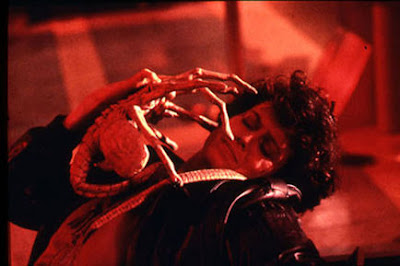 which basically shouts out to the same- trapped kind of dread feeling from the first film. The power that this movie has to make you both fear large gooey aliens AND small crawly aliens is pretty remarkable.
After hearing countless "did you know" facts about the puppet of the queen alien- and how it took 16 people to operate her- I was so eager to finally get a chance to witness it. 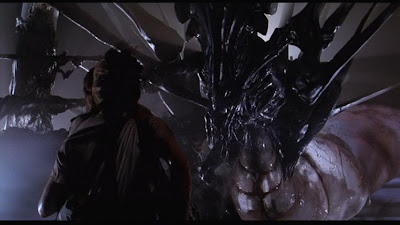 After getting through most of the movie and then seeing the queen alien just standing there- egads. If I was Ripley I would have apologized to Newt and then flung myself out into space. Seriously that queen is smart- she rides elevators! This isn't some lame ass giant Klown puppet that descends from the ceiling- this final monster is a doozy.
Finally getting to see Aliens was quite the experience. While I still think it may be too long- (I didn't even try watching the special edition version clocking in somewhere around 2 hours and 40 minutes) the film is still one of those rare occurrences where the sequel is just as good as the original. Ripley's evolution is fantastic- and even though she is unfairly prejudiced against Bishop (robot racism?) it's all part of her journey and healing process really. The point is. Aliens knocks off my socks.
Also- I know what I'm being for Halloween next year! 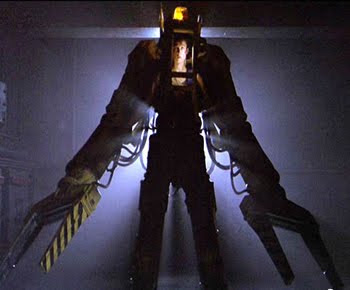 When Aliens first came out, t had that reputation for being better than the original, which it carried for years. But I've always preferred the original, something about that haunted-house-in-space thing that I love.

Aliens is awesome! I think the most tense part is when the auto guns are firing away, hundreds of rounds, paxton is counting down the rounds for those that can't read, and yet there's not a single alien in that scene.
If you happen to watch Alien 3, check out the director's cut. It's a totally different film, and way better than the theatrical.

I prefer Aliens to Alien, and i believe Alien 3 is under rated.

And if i saw someone with that costume, it'd be the best ever.

I was obsessed with this movie when it came out; I remember seeing it in the theater no less than 14 times. The extended version is really neat -- you get to see Newt's parents and learn Ripley's first name (as well as that of Hicks. I won't spoil it for you, but let me know if you want me to spill). Sigourney Weaver was nominated for an Oscar this year (which was the first for a scifi film), and it's just a good movie, all monsters aside.

I think it's tough to compare the two films- since they both have such differences in levels of fear. I guess if I had to pick one but I really don't want to---but IF I had to I might pick Alien. I like the idea of their just being one alien causing so much fear and chaos. Still though- both fantastic.

Nicole- I read about all the extra stuff on the extended version! Something about Ripley having a daughter of her own. Someday I'll see- but when I watch something for the time I like to see it the way everyone else did ya know?

I tried watching the director's cut a couple years back and couldn't get into it. It seemed too pro-military and so counter to the wonderful feel of Alien that I couldn't imagine how it earned the rep of being superior to Ridley Scott's work.

your review however is a fantastic read.

Thanks Mike! I know what you mean- it certainly feels that way--but for the most part I think it was more almost anti-military since they all suck and are douche bags--plus like I said it's really Ripley's story- and by being the only non army survivor- once again proves that she kicks major ass!

It's definitely more action packed then Alien which makes it more exciting- but I think in terms of which is better done I'd have to go with Alien. You can't beat the tension in that.

Aliens is like the orgiastic release of all that nihilistic horror and tension that built up it Alien. Finally, in Aliens, they have some kick-arse firepower that blows at least some of those fuckers apart - while in Alien they had nothing but raw fear and a few cattle prod type instruments. Yes almost everyone died in Aliens but at least there was some serious payback during the proceedings. Cool movie!

Don't forget the "Alien Stomper" Reeboks that Ripley wears. One of my friend had a pair. Look it up, Andre. This is for real.