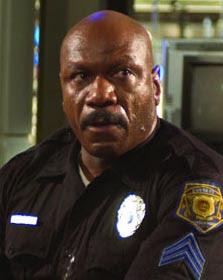 What better way to celebrate Valentine's Day than with one of the most caring and religious actors out there? If anyone has love for everyone- it's Ving.
Born Irving Rameses Rhames, Ving was notably a good student who discovered his love of acting in the New York High School of Performing Arts. After graduating he studied drama at SUNY Purchase where he met fellow actor Stanley Tucci, and believe it or not, it was actually Tucci who gave him his name Ving. Soon Rhames transferred to Julliard's School of Drama where he began his career in New York theater. He soon made his stage debut in the Broadway play, Winter Boys in 1984 and continued to act in the public eye by appearing on soap operas. However it was his role as Marsellus Wallace in Pulp Fiction that really showed the world who Ving Rhames was.
I think it's pretty fair to say that Ving Rhames is most recognizable in his Pulp Fiction role. For me however- I will always equate Ving Rhames with Leroy from The People Under the Stairs. 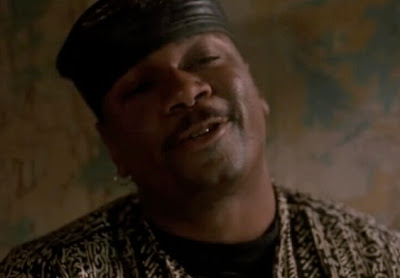 Why that role wasn't his break through role, we'll never know- well actually it may have something to do with the fact that Ving never really got to kick any ass in it. He does get gutted semi quickly.....but never mind never mind. I love the People Under the Stairs and I love how Ving decides that the best solution is to rob the landlord! Ving's role in Pulp Fiction however combined both strength and vulnerability- seeing a guy as tough as Ving get raped in the butt really showed you- that this guy isn't playing around. He wasn't afraid to take on a role with such a heavy scene- and that to me shows....GUTS!

Seeing Ving Rhames appear in a movie usually brings forth excitement- at least for me anyways. Let's face it, the man is a total bad ass. I guess I would like to see him play a non-bad ass role but for the time being bad ass is fine by me. Funny fast trivia--Ving was considered for the role of Ben in the Night of the Living Dead remake. Although he lost the part to Tony Todd- Ving of course went on to play Sergeant Kenneth Hall in the Dawn of the Dead remake! Looks like Ving was born to be involved in a Romero remake of some sort after all. Also let's not forget his role in Day of the Dead! Also, keep your eyes peeled for Piranha 3-D where it looks like Ving will play another cop- Lieutenant Bishop Welleger.
Fun Facts: Ving Rhames won the Best Actor in a miniseries Golden Globe for his portrayal of Don King. In his acceptance speech, he gave his award to Jack Lemmon saying, "I feel that being an artist is about giving, and I'd like to give this to you" Lemmon tried unsuccessfully to give the award back and claimed that it was one of "the sweetest moments" he had ever known. Ving Rhames really is a true gentleman!

"I must say that some things some men are born to do. I think I was born to kick ass."
Posted by Andre Dumas at 6:49 PM

Ving is the man!

Lots of mindless violence and Kelly Hu and Ian Somerhalder from Lost!

Ving Rhames played a drag queen in "Holiday Heart" with Alfre Woodard. He was excellent.