The Stepford Wives: I Still Don't Understand Why Everyone's Boobs Were So Pointy in the 70s. 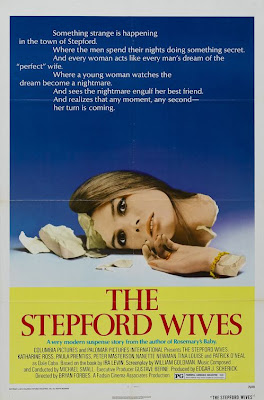 As much as I am a rooter for Black History Month owning February- I must admit that The Stepford Wives is a swell movie to talk about during "Women in Horror Month". I also must admit that I completely loved this movie- and a lot more than I thought I would. I think I'm a sucker for the slow build up type of movies- and for pointy boobies of course. While the ending of the movie is hotly debated- and the movie as a whole was regarded as anti-feminist by---yeah the feminists- I find that the movie has the power to spark up hours of debate and conversation- because it's that fascinating.
Joanna is a hip photographer living contently in NYC when her lame husband Walter suggests that they movie to the quiet town of Stepford. Joanna soon finds that all the wives in the town have a strange obsession with cooking and doing housework- being domestic more or less. Soon Walter joins the "mens" club and Joanna realizes that all the nerdy, lame husbands in town do not deserve their smoking hot wives...surely something is amiss! She finds comfort in two women who still seem to have their intelligence intact, but it is not long before her friends fall prey to the domestic curse. Desperate for answers- Joanna will soon find out a terrible secret about the true meaning of being a house wife.
What I love most about this movie is how it's a wonderful commentary on the women's movement, in my opinion at least. If you must know the extent of the metaphor but don't wish the movie to be spoiled you should probably skip this part. In fact just skip the review unless you don't really care about feminism or have any interest in watching the Stepford Wives.
While the Stepford wives represent the old- chauvinistic beliefs- Joanna and her enlightened friends represent the achievements of the first women's movement. You know- winning the right to vote and such. However the movement to turn Joanna and her friends into Stepford wives represents the 2nd wave of feminism- when women's rights to abortion, birth control, a woman's right to choose etc were taken away. And of course the satirical ending which may go a little far in my opinion- but it suggests that the "man" will always bring us down- right back to where we started. It's quite an intriguing metaphor and while at first I was enraged at the film's ending I came to realize that it's really just satirizing gender roles- and the insane lengths people will go to keep things... ARCHAIC!
Overall I just really loved how creepy- the "everything is perfect in Stepford" vibe was. The women aren't so robotic that you can pick them out from crowd at a moment's notice- but the actresses all have this uncanny ability to make their eyes so lifeless- it's pretty amazing. 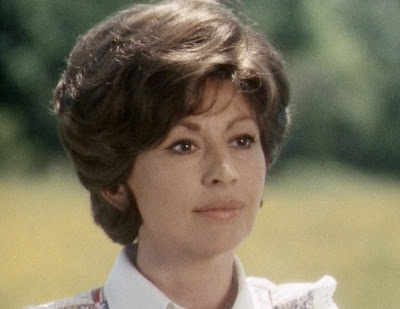 I loved the session Joanna had with her therapist- how the therapist tries to calm her down and tells her she'll be back in a few days and Joanna screams out,
"When you come back, there will be a woman with my name and my face, she'll cook and clean like crazy, but she won't take pictures and SHE WON'T BE ME!"
The argument that perfectly sums up why women's movements were fought in the first place- to avoid the destruction of individuality and the ability to just be yourself without constraint. Again I don't mean to sound too femi-nazi but the movie had my head spinning like mad and had me rethinking papers that I wrote my Junior year of High School! Maybe I read too much into it- but I really thought the whole thing was so intriguing.
Now back to the creepiness. I cannot properly describe to you the anguish I felt when Joanna realized that Bobbie had been changed. I had seen that scene a million times but I never imagined how heartbreaking it would really be once I understood the gravity of the situation. Bobbie was the best! She hated the way that the men were taking over the town and how stupid all the housewives were- and to just see her change like it was no sweat at all? Depressing.
Then the ultimate creeptastic moment- when Joanna stumbles upon her other self.....those black eyes will probably haunt me forever. 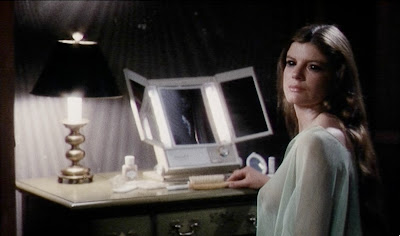 And of course the completely and utterly depressing end. I loved how that scene worked- following each house wife through each aisle- so slowly...it was almost painful because you knew who the last house wife would be. The slowness of that last scene was the perfect companion to the film's overall slow nature- understated, creepy and still terrifying in it's own right. Yup- I loved it!
P.S. how perfect was this image at the beginning in the regards to the entire film? 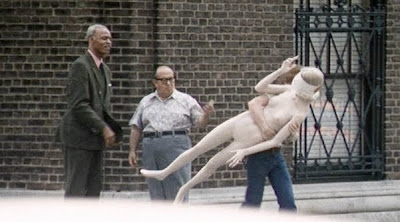 What I loved most about this movie is how it ripped on Disney. The guy behind it all designed lifelike robots for Disneyland. If you look at Disney movies, typically the gender roles are set in stone. That just made me chuckle.

On another note, Disney hires one of the highest percentage of gay and lesbian people. They can't be all bad.

Ooooh yeah! I totally missed that whole Disney thing even though I chuckled about the Disney guy- and how Joanna immediately compared the Stepford Wives to the robots at Disneyland! Awesome.

Thanks for this. I loved "The Stepford Wives", both the movie and the book. It's got that creeping-horror thing I love, plus a sharp sense of humor.