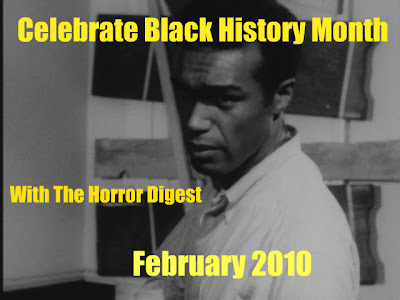 Well my friends we have come to the end. Throughout this month I have taken you on a magical journey, exploring the careers and histories of black actors and actresses who have appeared in horror/sci fi films at some point. Although I will admit sometimes I got a little saucy, and lenient with that criteria because some people I just had to talk about. But regardless, I have learned more in this entire month then I've learned about my entire four years in college.
What have I learned? The biggest thing that really stood out was the startling amount of talent that seemed to exist below the radar. People like Mantan Moreland, Maidie Norman, even horror legends like Duane Jones seemed to be horribly unknown in the realm of Hollywood. For some like Moreland, their careers were cut short due to the Civil Rights Movement while others like Norman had careers that were buried under endless amounts of supporting roles and stereotypical characters. As much as we would all like to believe that the idea of racism fizzled out a while ago, you can't deny the fact that any black actresses in films were almost always given the "best friend" role. As the wise Morgan Freeman once said- racism will finally be gone when we stop talking about it, when we stop pointing out that the female lead is black and start pointing out her sheer quality of acting ability. Granted this idea may be contradictory to my overall purpose this month, but for good reason. While Morgan Freeman despises Black History Month and while I do agree with him on some points---I do feel that right now Black History Month is one of the most important tools we have to move forward, if done correctly. I've found that a lot of people are afraid of talking about black history for fear they will offend others. To them I always ask this question, what kind of progress can be made by hiding something?
Black History Month to me, has always been about learning. In order for people to understand and to fully embrace the fact that black history really IS just history, we need to understand and absorb that knowledge. History is one of the most important things we can learn and take in--just ask Emmy Doomas, a full on History major. She'll debate till the end of time that learning about History is as equally important as learning about math. Learning about history is the key to understanding our future, so therefore learning about black history is the key to moving forward in history and hopefully one day ridding the world of racism. Do I sound too preachy? Probably. But sometimes I just can't help myself!
I hope you've all learned as much as I have, and have enjoyed reading about each of these great actors and actresses. It's probably the most work I've done in a while, and even though there were times where I wanted to just go to sleep and "forget" to do that day's posting, I stuck it out each and every time. And fortunately, each and every time I was proud of what I accomplished and so so glad that I did it. The best feeling I got was looking up a relatively unknown actor or actress and finding out that they lead one of the most interesting and inspiring lives and then being able to pass on what I learned to all of you was...the. best. Sure it's a little nerdy and a little lame--but I gotta tell you...I love learning! If I'm still in existence next year, and if our world hasn't been destroyed by Justin Bieber, you can surely count on next year being just as fulfilling and worthwhile.
So without further ado I bring you a master list of all the people I have talked about and highlighted. Please check out the ones you may have missed and enjoy!
Day 1: Duane Jones
Day 2: Naomie Harris
Day 3: Tony Todd
Day 4: Richard Lawson
Day 5: Geretta Geretta
Day 6: Cathy Tyson
Day 7: Morgan Freeman
Day 8: Scatman Crothers
Day 9: Tanedra Howard
Day 10: Keith David
Day 11: Samuel L. Jackson
Day 12: Kasi Lemmons
Day 13: Brock Peters
Day 14: Ving Rhames
Day 15: Yaphet Kotto
Day 16: CCH Pounder
Day 17: James Earl Jones
Day 18: Ernie Hudson
Day 19: Maidie Norman
Day 20: Texas Battle
Day 21: Mantan Moreland
Day 22: Stan Shaw
Day 23: Charles S. Dutton
Day 24: Ken Foree
Day 25: Raymond St. Jacques
Day 26: Marsha A. Hunt
Day 27: Laurence Fishburne
Day 28: William Marshall, Blacula, Blaxploitation
Posted by Andre Dumas at 9:40 PM

Fantastic job, Andre! I'm so glad you 'stuck it out'.
I've learned so much reading your entertaining posts this last month. Some of those folks I'd never heard of - or perhaps remembered them from a film but didn't know squat about them till you came along with your posts.
So thanks - and again, really great job!

One of the best collection of posts on a horror blog, ever. Well done!