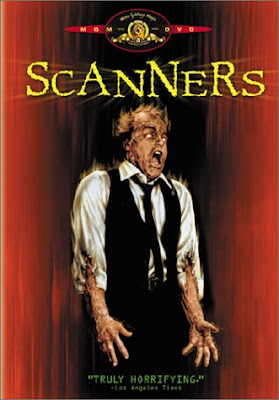 Scanners recently became available on Netflix Instant Watch and after realizing I was really behind on my Cronenberg viewing I jumped at the chance. The iconic picture of that guy's head exploding into a bloody mess was fresh in my mind as I eagerly waited to see just what the hell this movie was all about. I really pride myself on not knowing a ton about a movie before going into it and Scanners was certainly no exception to this rule. I didn't even know what the heck a scanner was. A grocery store scanner? A device that allows you to listen to police reports? Huh Scanners are people? WHAT? Just like in my experience with the Brood I have found that the best way to understand what a Cronenberg movie is really about is to just watch it.
Scanners are people with extremely strong telepathic abilities. Abilities that when matched against each other cause heads to explode, 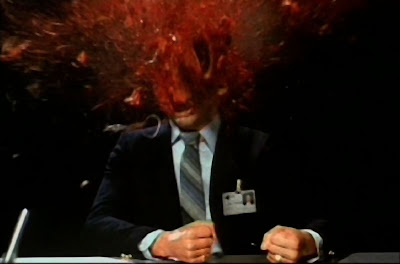 or faces to fall out. These abilities also control the minds of those not blessed with scanning powers- and allow for homeless men to get food apparently. Cameron Vale has these powers and is recruited by a company called ConSec to figure out the whereabouts of dangerous scanner Darryl Revok, a man they believe is forming some kind of underground army. Through his journey, Vale meets others scanners, and finds out startling information about the origins of scanners and about his complex and surprising past.
The whole idea of Scanners is pretty impressive- but what really tickled my fancy was all the imagery going on especially the troubled and disturbed art work of Benjamin Pierce. 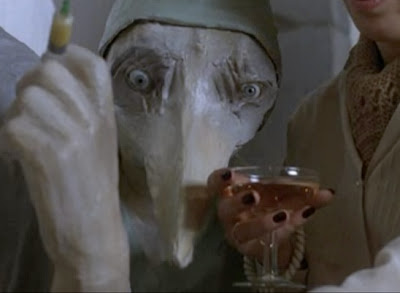 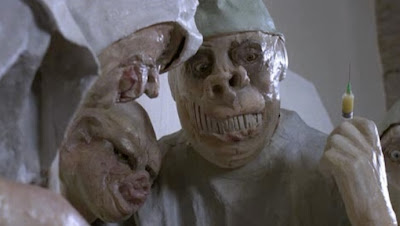 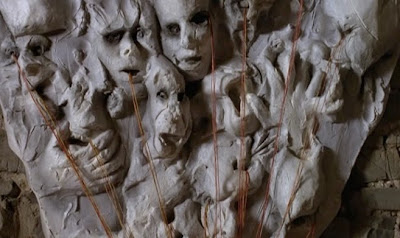 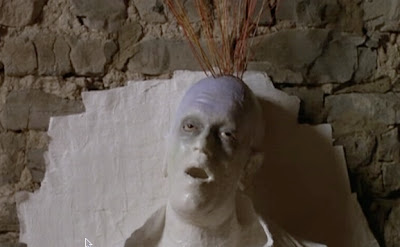 Honestly how much cooler can you get? These shots really got me- and the later scene with Pierce and Vale discussing how the artwork keeps the voices at bay was fantastic. It brought a whole other element of psychiatric illness, an almost schizophrenic side effect of the scanning power that wasn't explored throughout the rest of the film as well as it could have been. Pierce really seemed like the only one truly troubled by voices and I wish that connection was fleshed out more.
Michael Ironside as Revok was both creepy and tantalizing at the same time. I loved seeing the old video footage of him and how the bandage on his face gave him a literal third eye. I was surprised how absent he was for most of the movie since my limited understanding of the film seemed to place him as the protagonist. The reveal at the end, of Revok's relationship to Vale was kind of funny- but the final confrontation between the two was pretty mind blowing. It went to that place of dread in my head where I recounted bad memories of my first experience watching Poltergeist and the face ripping scene. After being hit head on with the face explosion so early in the film it causes you to almost wince every time someone makes that "I'm being scanned face" and although nothing seems to be as truly epic as that first explosion, the final confrontation still holds a certain power to it and almost makes you wince in equal torture. The final picture of the confrontation was amazing and really mirrored exactly how I would imagine such a confrontation would end. 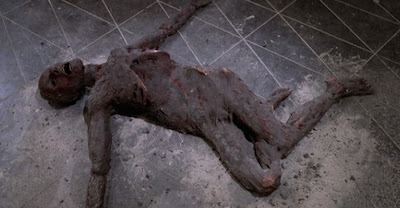 Overall I am once again reminded of how stupid I am for not getting into Cronenberg earlier, Scanners is a delight and I look forward to expanding my knowledge with hopefully Videodrome happening next. All of these movies are so unique and hard to explain to anybody who hasn't seen them. It's a rare kind of thing that a lot of movies today miss- the idea of putting you so far into the film and it's action that when the credits roll you wonder what your body was doing for that hour and 40 minutes while your mind was trapped inside a nightmare of fantastic proportions. Well done Cronny, well done.
Posted by Andre Dumas at 9:02 PM

Defenetly a memorable Cronenberg film! The final confrontation kicks ass, as well as the final frames of the film...when we find out what really happened!

Wow, you are in for a treat with Videodrome!

And if you havent seen it yet, i highly recommend you check out Dead Ringers. An extremely disturbing (yet more sexual then the rest) Cronenberg film.