The Tenant: Curiouser and Curiouser. 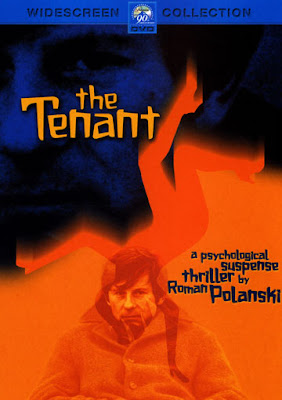 Well. So much for getting a good night's sleep tonight. No I'm not talking about being scared- I'm talking about how trying to figure out exactly what was going on in this film is nearly impossible. I'm going to be plagued with ideas of double identity, multiple personality disorder or possibly transvestite apparitions all night long. It doesn't help that Roman Polanksi decided it would be a real gas to dress up as a woman and scare the living day lights out of me either. 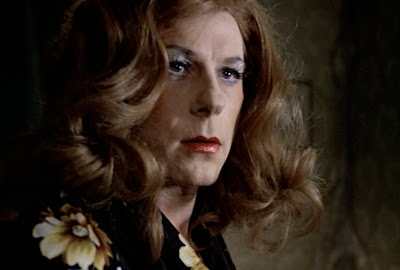 To put it lightly The Tenant is one of those films that has endless amounts of possible interpretations. You could probably find evidence for nearly 10 different theories-- all equally depressing and crazy and all equally strange and ludicrous.
Roman Polanski stars as Trelkovsky a strange bumbling sort of man who needs an apartment and shows up at one in hopes of renting. Upon his arrival he finds that the previous tenant flung herself out a window- but is clinging to life at the hospital. Eventually she dies- and Trelkovsky gets the apartment- ka ching! Soon...well sort of soon I'd say about an hour later(moving watching time that is)- things start getting weird. Trelkovsky seems to think that the residents of the apartment are trying to turn him into Simone- the woman who killed herself- in the hopes that Trelkovsky too will take a trip out the window. As time moves slowly onward and Trelkovsky tries to understand what exactly happened to Simone- we are left with the idea that things are just... plain crazy man!
Now I left things out of that summary on purpose because there are certain things that just won't work if I try to explain them. Like the hospital scene- and how Roman Polanski meets a girl- takes her to a movie and starts feeling up her boobies almost instantly. So if you haven't seen this don't read further or you'll just be insanely confused. Or go for it if you want- but don't blame me if you wake up in the middle of the night with a missing tooth and find that it's crammed into a hole in the wall...
To be completely honest- I really was not interested in this movie at all until about half way through. I find that this happens with me and most Polanksi films- because I can't get over the fact that he is far too stingy with that editing button. I'm all for a slow build up type of flick-- and while the beginning may have built up an atmosphere it just really felt so dragging and boring to me. And yes I know that it's purpose is to see the two extremes of Trelkovsky's character and to fully understand and realize his degradation- BUT I hated it- so sue me. The last hour of the movie however was so sublimely creepy that I almost spit out my tea in excitement.
The scenes where Trelkovsky looks out his window and just sees different tenants staring at him blankly from the bathroom window were incredibly unnerving. Culminating of course with Trelkovsky stumbling to the communal bathroom and looking out the window to find himself looking at himself from his apartment. Then the ultimate creep-fest--when Simone is in the bathroom, unwrapping herself and laughing at him with her missing tooth. 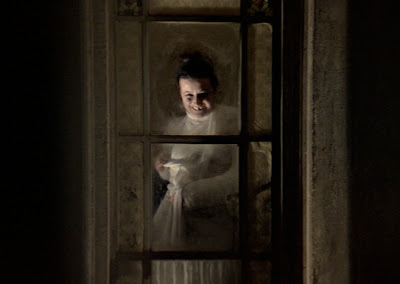 Then there's also that fantastic scene where Trelkovsky walks into the hallway and everything seems so distorted and crazy. Not to mention seeing Polanski painting his nails red seems a little odd at first- but nothing NOTHING compares to seeing Roman Polanski in this state. 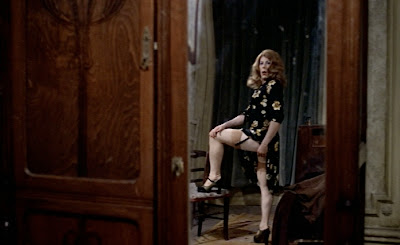 But my favorite- favorite thing that happened was when Roman Polanksi as a woman is sitting in front of the window and a bouncing ball keeps flying up which then turns into a severed head taking the place of the ball! 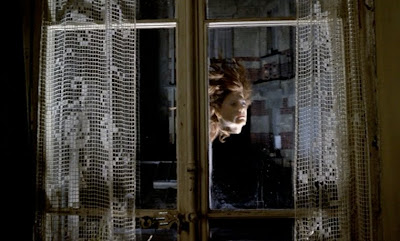 Gah. There were so many great images and things happening that I could hardly contain myself..... The tenants staring at Trelkovsky and everyone applauding him and being excited- the missing tooth that discovered in the middle of the night, the "mob" type scene where they put a jester costume on the girl and a weird Roman Polanksi mask on her face. 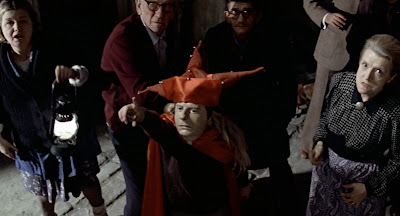 And of course the entire ending and how it is just one giant "What the fuck" moment.
I could talk about possible interpretations for hours- but to be honest I don't think my head can put into words exactly what I was thinking. I will say though that I read a very compelling and fascinating interpretation that has pretty much convinced me to take it as the truth- even though finding such a truth is probably pointless and I doubt even Polanksi knows exactly what was happening. I suppose I'll have to read the book to really understand it- but I can honestly say that I could watch this film 20 times and never fully comprehend just what is going on. If anyone wants to talk theories- now is the time to discuss. If you enjoy films that invite open interpretations and unclear answers and resolutions- then look no further. If you require clarity- give up now.
Oh! I almost forgot the most important scene! Roman Polanski slapping an annoying child in broad daylight in a park- YES!
Posted by Andre Dumas at 9:31 PM

This is actually one of my favorite horror movies ever. I have no interpretations at all though. I haven't a fucking clue what it means. I just love polanski in a skirt dragging his bloodied body back up the stairs for one last suicide attempt.

Sounds like I just found a new movie to watch next week! Thanks for this review, I love a good mind fuck! Sounds like this movie goes into Lynch territory which is always a plus for me.

I love Polansky horror, I really dug The Ninth Gate and of course, Rosemary's Baby.

Easily ranks among my top ten favorites of all time!

Polanski is the master of utilizing location, and this fits in very well with Repulsion and Rosemary's Baby as a cool little trilogy set in urban places.