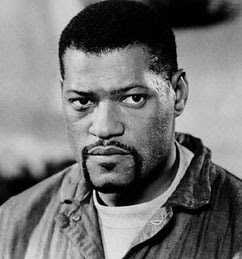 There was no one more angered than me when I found out that "Laurence Fishburne Day" in Cambridge Massachusetts is the 24th of February! I was angry because A. no one told me and B. Laurence Fishburne Day at the Horror Digest is February 27th. What a load of crap! But I suppose I will just have to move on and pretend that everyday is Laurence Fisburne day--well actually, who's pretending? I've always loved the Laurence, and anyone who says differently has to be lying. The man is awesome.
Born in Augusta Georgia, and brought up in Brooklyn New York, Laurence began acting at the age of twelve when he landed a role on the soap opera, One Life to Live. When he was fourteen, Fishburne lied about his age in order to score a part in Franics Ford Coppola's Apocalypse Now. Us horror fans may now him best as Dr. William Weir in Event Horizion 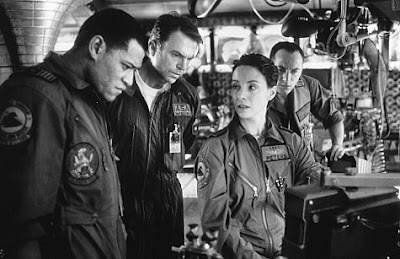 but this of course doesn't mean we can forget his role as an orderly in Nightmare on Elm Street 3: Dream Warriors.

Laurence Fishburne's career has been decorated with a plethora of roles from good guys to bad guys, doctors and fathers and from Morpheus to the now head of the CSI unit in Las Vegas. No matter how small or big his roles may be, we always somehow manage to remember him and somehow connect him to being the best part about the entire movie....hmm....that may be just me though. 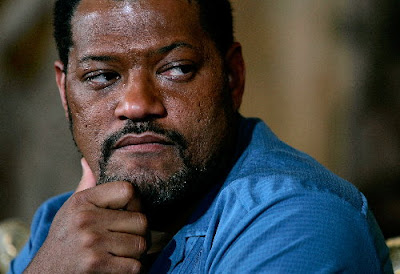 So to try things out a little differently here, I will be giving you some interesting excerpts from his official website on different topics surrounding his life and career.
His Favorite Actors:
SIDNEY POITIER showed what was possible for me. You must remember, when he arrived, it was the height of the Civil Rights Movement. He showed up as this sterling black man, with strength, courage, and grace. He was a black man who did not bow to anyone. Always eye-to-eye with the white people he shared the screen with. White actors had to come up to his level.
JAMES EARL JONES showed what was possible in terms of range for a black actor. He played a wide variety of roles. He was the first black president on screen, then he was a garbage man, then the prize fighter Jack Johnson, several Othellos on stage, Darth Vader, and this TV movie about alien abduction ("The UFO Incident", 1975). What a range of roles he played.
PETER O'TOOLE has a kind of intensity that I find absolutely thrilling. He expresses with an intensity that I can relate to. I have that kind of intensity inside me. He has this way with language, a way of speaking that's incredibly intelligent and witty at the same time. I just love the way he swings. They couldn't figure out how to give him a real Oscar for his work, so they gave him a lifetime award. It's great, but I wished they'd given him more than that.
ROBERT DENIRO AND AL PACINO came along in the 70s when I was seeing myself as an actor. They were ethnic guys. They didn't look like movie stars--a dark Sicilian? Woah! So the language they spoke, contemporary, and me coming out of Brooklyn where everybody talked like that. So I can really relate to them. I found their work captivating, riveting and deeply human.
Choices
IF IT DOESN'T FEEL RIGHT, it's not for me. For me it's never as simple as choosing. I don't sit down and think "How am I gonna get this?" It's what comes to me and if it feels right.

It's all intuition--every choice, every script, and every nuance. For instance, Quentin Tarrantino wrote "Pulp Fiction" with me in mind. But when I read it, I told him I couldn't do it. I had too many problems with it, just personally. It just didn't feel right for me. And I know it was a great role, but not for me.

Beginnings
I HAD THIS MOMENT when I was 10-years old: I realized that as an actor I could be anything; there wasn't anything that I couldn't be, and that felt right to me. It wasn't about "whether" I was going to do it. It just was. I was an actor. I didn't tell anybody. It was a private moment I had with myself. It was just very clear. I didn't have to set about doing anything. I fell into the flow of the universe, and that was it. It was just a knowing feeling, a simple fact. There was a tremendous feeling of "This is what I am, this is who I am." I didn't have to pursue it. It is just my life's calling. I'm not somebody who decided I wanted to be famous on TV or in the movies. I was introduced to the theater reluctantly. I didn't want to be involved. Then when I did want to be involved, my motivation was the money. But then, when I didn't get the money, there was something left there that matched my gifts and creative talents. "F--- the money" I said. "If I do this, there's nothing I can't be and nothing I can't do." As an actor, I get to express myself and my creativity in a way that's completely natural for me. It's been inside of me all of my life. Because of my mother's keen sense of observation, she was able to get me to a place where I could understand it and I could connect to it. 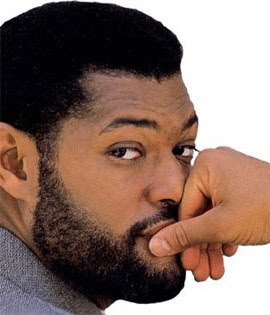 Will always love him from Pee-Wee. Hey, Phil Hartman got his start there too, so Pee-Wee obviously had an eye for talent!
And there's a Laurence Fishburne Day??

The man ROCKS. For Event Horizon alone he should be honored. Woo.