Inside: Possibly the Dumbest Cops in the History of Cinema. 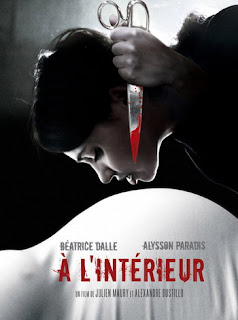 I can't get over how utterly fucked up this movie is. Good yes. But really, really fucked up. The French know how to make a horror movie. I'm so over people being obsessed with Asian horror movies- French  horror movies are true and genuine terror. I felt like I was trapped in some bizarre funhouse where I was strapped to a Clockwork Orange contraption and forced to watch scissors cutting open a stomach. I really wanted to look away but I just couldn't.

In a nutshell- Sarah's husband died in a car crash, she is giving birth to the still alive baby- but on the day of delivery a crazy woman shows up and tries to cut the baby out of her stomach.

I was so freaked out when that lady was standing outside the sliding glass doors that I picked up a magazine and pretended to be interested in a story about the rising trend in pumpkin flavored food. The way her face is barely visible and the smoke from her cigarette seeping up into the air. Then later when Sarah is falling asleep and there is a vision of the woman with that same cold stare and barely visible face fading into the background?! Hoooly shit. From then on I knew I would not be able to rest peacefully throughout the duration of the film. No way in hell.

These French movies really somehow find the pure innate terror that should exude from a human being when faced with such a situation. What you are seeing and feeling on the screen is pure and raw emotion that is really hard to find anywhere else.

The only problem I had was why the cops had to be such freaking idiots. Honestly? You "lock up" a pregnant woman who has just been harassed by a crazy lady in her house and she is safe? Locks don't do anything and just because you can't find the crazy lady doesn't mean she's gone. Oh you're going to be sending someone to check on her every hour? Yeah that works real fucking great especially when the crazy lady kills every cop that shows up! Good one. Sorry if I spoiled things for any of you but I really couldn't get over their stupidity. Like how that one cop couldn't handcuff the crazy lady before she drove a knitting needle into his neck? Bah. Oh? What's that? Gunshots inside the house? Who needs backup I'll just attach this person I arrested earlier to me and take a little stroll inside to see what happened!

Yeah. Great if it was just trying to provide some "comedic" relief from all the intensity- but nothing is comedic about that.

There were some moments in this film when I honestly felt like I might faint, either from terror or from nausea. Those same moments were so engrossing however that I was in awe at the effect they had on me. The very last scene in particular and that entire long last shot was just completely horrifying. The crazy lady is really really scary. She wears this long gothic black witchy dress and you're all like umm why are you wearing that to cut a baby out of someone's stomach? And then you get all distracted by the enormous gap in her teeth and by the end you just really want to kill her and smash her up into a million pieces.

The ending was surprising and once again refreshing in a world where I half expected there to be no crazy lady and that it was just Sarah the whole time. But thank god for no twist ending. There was a bit of one but it was warranted and not insanely stupid and pointless.

Clearly one of the better films I've seen lately- right up there with Martyrs. Seriously this is not one to miss if you have enjoyed the other French films and also if you just really want to be completely horrified and stunned.

I saw it and i liked very much, the atmosphere that creates when you are viewing this is unique, and again i agree with you about the cops, they are really the worst! But i dont know Andre, i think i dont get it all...who is that lady in black? and why does she want the baby? I think we deserve a little in-movie explanation, dont you think?

The lady in black was the woman in the other car when the crash happened! She was pregnant at the time too but ended up losing the baby. In her twisted mind she believes she needs to take away what as taken from her! Sick, twisted, and amazing.

Just finished "Inside" and loved it. You nailed it: "sick, twisted, and amazing." Man, the French sure can make a good thriller. I do have two questions I'd love your thoughts on (spoilers ahead...): what did you make of the cop that went from really, really dead to not only alive but alive and pretty damned strong? I dunno, this took me out of the film a bit. And what about the line "they told me there were no survivors"? How could that have been? This muddied what I thought was a great and unexpected twist. (I loved that we find out it was La Femme's voice we heard in the film's opening.)

What do you think? Thanks and keep up the great work!

Thanks Art. I for some reason remember venting somewhere about that cop that suddenly comes back alive too. That is rather irksome. It felt like one of those moments where a really great movie for SOME reason feels like its lacking in the scares and decides it needs a good jump or two.

As for the no survivors thing, well I guess I never really thought about it! That is pretty preposterous. Hmmmm Maybe when they had told her that, it was directly after and the woman was in critical condition on the way to death? Very interesting point though.

I can't even remember the voice you are talking about in the opening though. It's been a while since I saw this. I wish all of these fantastic french films were on Netflix Instant watch.. sigh.

Hey again! Sorry, I can't stop writing about this film. Yeah, the film opens with shots of the baby in the womb, and we hear a muffled voice saying things like "I love my baby," etc. The voice is muffled enough to sound masculine - and I assumed after the accident scene that it had been the husband speaking just before his death! Then, when we see the flashback to the lady in black in her car and hear her speaking the words - in her slightly masculine voice - it's a total "A-HA" moment. Love those!

Man, I loved this film, even with the occasional "WTF" moments. And thanks for posting the original poster - so much better than the DVD cover. Another great thing? "Inside" is too wonderfully twisted to EVER be remade in America. And that ain't bad!

I think my favorite part of Inside, is that despite how horrifying it is, it is also a very beautiful film to look at. The lighting is really great in every scene in the house. And something about the weapon of choice being a simple pair of scissors really creeped me out. You see scissors every day usually, so it's very terrifying to think of someone wielding them as a weapon.
And I have a crush on that lady in the black dress, with the huge gap between her teeth.

RE: The dead cop who comes back to life

I do not think that cop ever died. I think he had been shot with his own weird-looking taser gun that he brought into the house. I have tried to find more information on this type of gun, but found nothing. I think the idea was that he had been shot with his own taser stun gun, and when he revived he believed either that Sarah had shot him, or that she was otherwise somehow responsible for the carnage that had been going on in the house. That is why he attacked her when he woke up.

RE: The lady in black

I believe the antagonist was the passenger in the other car at the beginning of the movie. Like Sarah, she was pregnant at that time, but her baby died. Perhaps she, too, died...how else can you explain how she was somehow materialized in the house after Sarah locked it up?