Whatever Happened to Baby Jane?: She Became One Crazy Mothafucka. 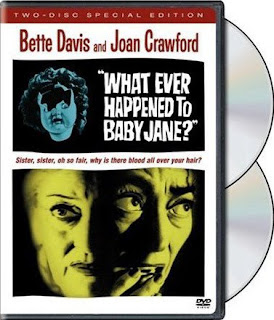 Whatever Happened to Baby Jane is the ultimate predecessor to movies like Misery where you are trapped and have a wheelchair with no where to roll to. At the heart of this movie is the feeling of hopelessness and crazy people- my two favorite things. Baby Jane is a nut job who feeds her wheelchair bound sister grilled rats, and still thinks she's a darling little child performing her awful vaudeville act. Ooh baby Jane what did happen to you?

So we begin with Baby Jane Hudson and her amazing (?) Vaudeville act that seems to sell out every single night. She has a whiny warbling voice which is apparently good enough to get her creepy 3 feet dolls that look like her. She sings creepy songs about sending her father letters to heaven and no surprise here- is actually a huge brat. Her sister Blanche hides off in the wings and is embarrassed by baby Jane's constant selfishness and diva tendencies. Fast forward and we find that now Blanche is the one that has made it. She is a successful and famous Hollywood actress while baby Jane has become an alcoholic. One night following a suspicious accident- Blanche is left crippled and sentenced to a wheelchair for the rest of her life. As Jane's sanity starts to wane so does Blanche's chance for survival when left to the care of her jealous and crazed sister.

The best part I thought was when Jane served up a nice steaming bowl of rat, and bird too. Jane is so whacky in this it honestly made me a little uneasy. But seeing that rat curled up on that plate- egads! Then when Blanche tries to send the note out the window- pretty tense but also made me mad because why didn't she just yell at her neighbor that she was throwing a note to her? Or say please help me my sister is crazy and feeding me rats?

I also loved when the piano guy came and Jane revived her letter to Daddy song and the piano was just continually cringing...mwaha. And when Jane killed the maid with the hammer- superb! The film is overall pretty creepy and unsettling just because Jane is so scary. You never know what crazy thing she'll do next- and she looks terrifying as hell.

My only question was, why was baby Jane even famous in the first place? Her act sucked. If I paid money to see some bratty girl with blonde hair sing a shitty song and twirl around I would be pissed! Why are her performances selling out why why why!? Other than that basic insanity however the movie is an instant classic and what makes it even more fun is that Joan Crawford and Bette Davis hated each other in real life! Real tension, real kicks to the head...real rat feeding? I hope so.

I loved how tragic and funny Baby Jane was. Great review- you reminded me of the piano man cringe scene!