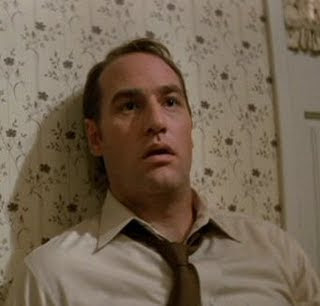 Paging Mr. Freeling...when dead bodies are buried under your house- it might take a little more than a fat little psychic to make the bad things go away. It's also strange how just getting Carol Anne back suddenly means the house is "clean". So the big question is how could Steve Freeling, after seeing a tree try to eat his son, a massive gross beast thing come out of the closet, and his daughter and wife covered in pieces of grotesque other dimension jelly allow for his family to wait for him in that crazy house?!
Apparently this was because he was too busy doing things at the office with his dumb boss who builds houses over graveyards. Fuck that. Get out of the house and get out of there now.
Thanks to his crazy decision- the house tries once again to suck Carol Anne back into it's core and steal her life force. Poor Carol Anne and Robbie just trying to live their lives when their closet turns into a pulsating fleshy intestinal track. And then Diane has to endure electric shocks, ghost rape, and a bath of mud and skeletons just to save them. Way to go Steve Freeling. Seeing coffins sprout out of the ground and skeletons flying at the car must really have scarred your family for life. Thank god the dog made it out alive or you'd be in even bigger trouble.
Posted by Andre Dumas at 2:36 PM