Teeth: I'm More Grossed Out That They Used Those Blankets. 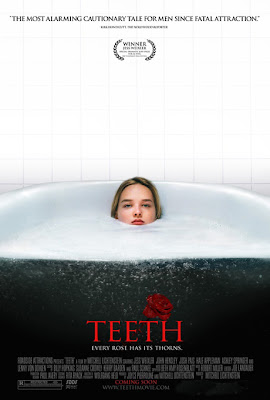 I've heard about this one through some grapevine of horror movies that are crazy and absurd and offensive but still good. All you really need to know about this movie is that the our leading lady discovers she has a vicious pair of teeth in her vagina. Yes you heard it right. Teeth in the va-jay. Now what I find very funny and fitting is that I was just complaining about lack of penises being cut off a few posts ago and boy was I asking for it. Teeth is definitely not afraid to go there that's for sure.

This movie is hilarious, inappropriate, bloody, and offensive- basically all the things a good horror comedy should be. There is also something very intelligent going on. I loved that Dawn was part of those lovely bunch of kids that want to save themselves for marriage. At first you think how convenient a girl with teeth in her vagina has never had sex! But then they bring in this whole thing about evolution- and survival- citing the example of how the rattlesnake came to be. Then once Dawn SPOILER has sex and enjoys it and nothing happens to her partner's penis- we realize that her teeth in the vagina are a form of survival because they only strike when Dawn does not want sex to happen i.e. rape. So there we have the solution to all of the worlds problems.

Unfortunately men who see this movie find it very offensive because it's basically saying that all men are rapists. I still think however that the movie in the same way that it shows the lameness of abstinence is saying that sex is OK as long as it is used in the right way. Even though Dawn was drugged that one time and enjoyed it- she still enjoyed it just as much the next morning until she found out it was all for a bet! The movie had to feature a cast of all men who were perverted and rapists or else the movie would have had no point. If you have a movie about teeth in a vagina I'm sorry but there can't just be one rapist involved.

Now the movie was hilarious and it was also one of those movies where you kind of want to turn the sound on your laptop down and I'm pretty sure my roommate thinks I was watching a porn but WHATEVER. The things that go on in this movie will make you cry aloud words like WHAT?! and WHAT THE FUCK?! The doctor scene did that for me....when I saw that ungloved hand I was wide eyed and shocked. But the beauty of this movie is that it never really takes itself too seriously. In the hour and 30 minutes of running time Dawn has successfully matured and witnessed the real world. Although I don't believe in abstinence, one of Dawn's shirts did catch my eye; "Danger: When you have sex, everything changes" and this is actually very true. Because once Dawn's world and her eyes were opened to sex everything did change- but without that same change she would have been ignorant and so unaware of how the world is outside her perfect bubble.

I wish I didn't sound so preachy but I really enjoyed this film. It had a real point to it and actually made me think quite a bit. If you aren't too squeamish with penis gags then try this out- it is definitely an original piece of cinema.

Nice review, I need to finally check this film out. BTW you weren't preachy, this is your blog you can say whatever you want!

Thanks! That is very true actually....I'm going to preach all the time now.