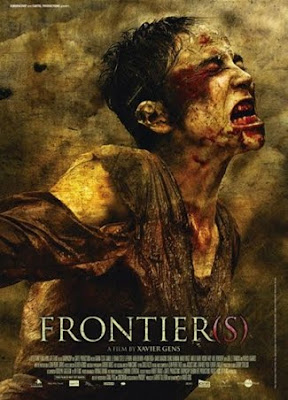 Sweet Jesus those French people can sure make one hell of a fucked up horror movie. I've got to say these french horror movies are really some of the greatest I've seen. Frontiers is kind of like a much better version of Hostel, plus a spin on the Texas Chainsaw Massacre with even a little bit of the Descent thrown in. It's a hodgepodge of horror trademarks but it still works out and still leaves you feeling incredibly exhausted and emotionally drained.

In the midst of political riots, Yas and her uber jackass boyfriend and his thugs plus Yas' brother flee from a looting gone wrong. Yas' brother gets shot and killed and they end up splitting up after fleeing from the hospital. Bleach blonde thug and more reserved video camera obsessed thug stop at a seedy Hostel/brothel? Where they get to have sex with two crazy women. After a family dinner turns vomiting inducing, bleach blonde requests more sex to which the blonde whore shoots down. Angered with her response he calls her a whore and the two boys are later met by one of their angry brothers. Fights ensue the boys try to escape their car falls into a mine shaft- they are OK, climb up a highly claustrophobic mine shaft tunnel thingy and find a horrible surprise on the other side.

Basically this "family" is run by a former SS leader who is really excited about starting a new world order. He demands pure blood- yet settles for Yas' unborn child to be the next carrier of the bloodline. Right doesn't really make sense. The family also seem to be cannibals, harvesting humans as they would pigs. Come to think of it I don't even know why they have pigs at all if all they care about is human flesh. Yas is taken into the family- befriended by a young girl who was kidnapped as a young girl- and is expecting her fourth child via her fat "brother" Hans. Her children have all turned out deformed though and hide under the factory- they look like wall crawlers from the Descent. Strange. Anyways Yas needs to regain her courage and fight for her life against this brutal and really fucked up family of nazis.

The movie surprised me because in the beginning I really got a sense of...wait is this really a horror movie. And then suddenly we are emerged into this horrible factory/mine shaft place that dares to go where Hostel did not. The deaths in this movie are no joke. The tablesaw scene, the "pinchers" scene were unbelievable in the amount of gore and blood. If you thought the achilles tendon scene in Pet Semetary or Hostel was hard to watch- just you wait my friends, just you wait.

The movie really creates some thought provoking questions. About who has it worse Yas or her boyfriend? I guess I would rather be killed quickly then have to be part of that Nazi family. Also- why was only that one woman blonde? Are all these kids really Aryan pureblood? I doubt it- which makes it even stranger because I'll tell you if Voldemort wanted to make a pureblood new world order, he sure as hell wouldn't be recruiting half bloods or muggles and PRETEND they were pureblood- just saying.

The only problem I really had with the movie was that the characters really had an uncanny ability to survive things. For instance when the barn explodes and the blonde woman is clearly seen blowing up in the fire- she comes out virtually unburned and pretty much fine? The boys crashing their car 30 feet down a mine shaft and roll out basically ok? It was kind of bizarre.

What I did love about it was how the humans were really treated like pigs. Being strung up on hooks and bled out, and even later salted? Pretty nuts. That picture of all the dead bodies in the bags hanging in that room? Wow. Oh and I almost forgot two other incredible bits of gore- the hooks in the feet scene and thug boy trying to help out his friend but fails- and the cute thug in the intense steam room place. Yikes. Yeah let me just say yikes yikes yikes. There are some truly memorable scenes in this that I definitely won't be forgetting anytime soon.

It may not have been as wonderfully done and awe inspiring as Martyrs- but damnit it was still crazy as hell. It creates a feeling of pure suffering and torture that I felt Hostel and especially Saw really missed out on. There is genuine emotion and horror that emanates from this film and it will stay with you for a very long time.

I love this movie. I recently wrote about the girls of the film, who I think are all really awesome and interesting characters. The kind of range of women you'd never get the chance to see in a Hollywood movie, that's for sure!

Oh I know! The girls always kick major ass in these French films - they aren't merely first victims showing their boobs and getting killed in a pinch. They always seem to be the last one standing...perhaps a critique on our ability to outlast men?? mwaaha

I just watched this one last night (again). I usually don't have patients for foreign horror, however, this one made it on my horror list (4 out of 5 skulls).

According to other horror films like Staunton Hill & Slaughter (both 2009), cannibals seem to raise their pigs with human flesh as well. I can only imagine that they use the pig intestines to make human sausage links. Perhaps it is all to convenient to have a slaughter house and use the same tools.