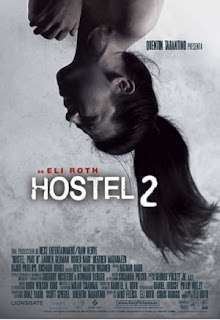 I expected to hate this one a lot more than I actually did. In fact, it is very possible that I enjoyed this much more than the first. My first thoughts within the very first moments of the film were that I hated it. Why bring Paxton back at all if you're just going to dispose of him in the lamest of ways? It felt like his sole purpose was to make this movie a part of Hostel rather than a sequel, and that's just manipulation! Once Paxton was disposed of however things got more interesting.

The change of sex in the main characters was very intriguing. I figured we would only be met with brutality and rape, but it turns out the girls are more powerful than the men, and know how to use their money wisely at that. While Hostel continues to portray Europe in a highly unfavorable light, it does it affectively as I continue to avoid ever going to eastern europe and staying in a hostel. Especially a hostel where that creepy guy is at the front desk.

It was fun to see that nothing had changed from the first. Still the same old Hostel, and the same old derelict factory- only we get to see different sides of it- and in addition to that a different side of the elite hunting company in general. I did find myself wondering however, why miss blood bather got such a nice spread when everyone else got the standard meat torturing chamber look. Oh well different strokes for different folks.

The blood bath scene was pretty amazing. I honestly didn't think Eli had it in him to make such a moving scene. The blood turned excessive kind of quickly as I would have enjoyed a much more artful dousing of it, but other than that it was a very thoughtful and original sort of kill. Bijou Phillips' character on the other hand- bit of a gyp there. Viktor Krum's sequence was very stomach turning and felt like a total throwback to Hostel where I received no pleasure from watching what was unfolding on screen. Perhaps the girls just always reign supreme.

The ending was very enjoyable to watch and I'm glad things ended the way they did because I was very worried for a second there that the whole twist and character reversal would ruin things. Overall I enjoyed the way the beginning showed all the businessmen bidding on the girls sometimes in the comfort of their own homes and even next to their family. I also liked how the movie wasn't just a regurgitation of the previous movie only with different characters. I thought it brought things to another level that was both satisfying and exciting.

While I didn't enjoy the beginning, or the lord of the rings type music that played when the two businessmen were walking to their rooms, I was still pleasantly surprised. I don't entirely enjoy these movies because they still make me feel all gross and barfy feeling-but needless to say, I am thrilled that my secret crush was able to make this movie somewhat enjoyable to me- a self proclaimed Hostel hater. Thank you Eli, you have proven me wrong.
Buy Hostel 2 at Horror Movie Empire