Fair Haired Child: Lori Petty's Hair May Be the Most Terrifying Part of This. 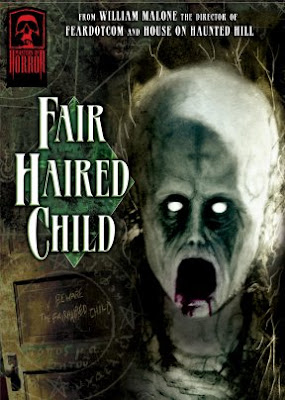 Fair Haired Child is my third Masters of Horror viewing. It begins with your typical- shy girl who is really attractive- yet is hated by her classmates for unknown reasons story. Personally I don't understand what kind of world these stories come from. Who starts laughing maliciously when a classmate is trying to do a math problem?! It's the same kind of strange absolute and unwarranted hate that comes from movies like Carrie and Tamara. It just doesn't make sense. At least have a really ugly person be your leading lady for Christ's sake.

ANYWAYS Tara gets kidnapped one day riding home on her bike. She wakes up in a strange hospital type room where gothic Lori Petty greets her. She says they found her and they are now in Vermont and give her an address. Tara tries to call her mom but apparently her mom is an alcoholic and doesn't understand what Tara means by "Mom someone fucking kidnapped me and I need you to come get me" It is a rather difficult statement to figure out I suppose.

It is not long before Tara realizes that she is not in Vermont, and she tries to escape the creepy haired clutches of Lori Petty but is thrown into the basement by Lori Petty's nice husband. I use the term "nice" loosely because he is the one that kidnapped her after all. He is pretty nice actually and seems to have some reservations about what they are doing.

Sooo Tara finds a boy trying to hang himself in the basement and she makes friends with him. They soon discover the true meaning of the what the fair haired child is and Tara must try to escape with her life.

The episode definitely reminded me of Are You Afraid of the Dark for adults. The ending especially that kind of things are better- but are they really type thing going on. There were a few very creepy moments including the revelation of what the parents were trying to do, the writing all over the walls, the bloody bathtub and of course Lori Petty's hair.

If my mom had a shaved head- dyed black I would disown her immediately. I don't know who decided that fashion statement or why but it was just the most distracting thing about this. It probably could have been a really decent episode but her hair bothered me too much.

The appearance of the fair haired child was a little creepy- but again something seemed too CGI about it or too showy to be truly terrifying. The story overall is very interesting but I still have problems with the ending. It wasn't a twist really but it still kind of made me feel cheated. It was still entertaining and a good dose of an hour of horror. Not my favorite MoH but it still makes it mark.