Cigarette Burns: You Would Have a Creepy Wingless Angel Chained in Your Basement Ron Camp. 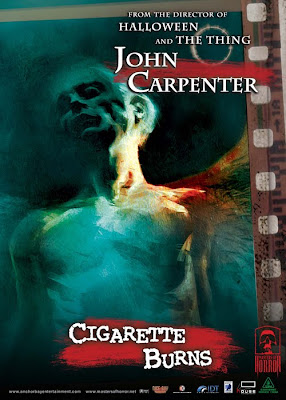 Cigarette Burns is my second viewing from the TV series the Masters of Horror. After reading about which episode fans found to be the best- Cigarette Burns was clearly many people's favorite. John Carpenter is the master who directs this one and I was surprised at the level of gore in the episode- one little gem of a scene in particular.

The episode centers around a sort of legend about a French film entitled "La Fin Absolue du Monde" the Absolute End of the World. Apparently the film was only showed to the public one time- resulting in the entire audience being over taken by a homoicidal rage. A creepy rich guy played by Ron Camp of Ace Ventura Pet Dectective fame, offers a gross Kevin Federline look-a-like money to recover the film. Kirby/ K-fed is dubious about the existence of the film but Ron Camp leads him to his basement where he has a "prop" from the film. A creepy, thing and albino looking angel who's wings have been chopped off. The angel says that his existence is tied to the existence of the film. Kirby sets off on a wild adventure to recover the film and ends up uncovering the true meaning of La Fin Abosolue du Monde.

So what freaked me out the most was probably the angel. He has a big bulbous veiny head and gross albino colored hair and is all skinny and gross and kind of makes me want to vom a little. Also the gem of a scene I was referring to- I'll just say it- Ron Camp wraps his intestines around the film reel and turns it on. Yes we get to see his intestines being pulled through the reel. Mmmm Mmmm Mmmm. Reminds me of that woman in the Mother of Tears who got strangled to death with her own intestines.

The story is pretty intriguing but to be honest possibly a little over my head. This could be because I watched it in segments as I was consistently interupted while watching it. The episode is only like an hour long but it took me about 2 weeks to finish. This could say something like it's not that exciting or whatever but the story and whole episode overall is entirely engrossing. I will say one thing however- I will live peacefully if I never have to see that creepy angel again... 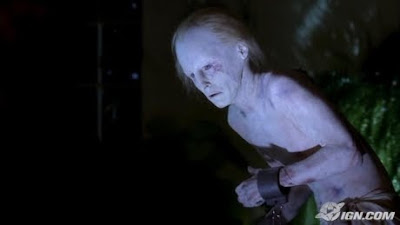 Oh nuts there he is again.

My mind doesn't wander when Norman Reedus is involved :-) I don't know what it is about John Carpenter's films but I'm always fully invested by the end of the first scene.

John Carpenter's Cigarette Burns inspired me to make an experimental short film. I studied different techniques of influencing the human mind and attempted to implement them into a story. Art can be presented in the form of a product, or it can be used as a tool to promote different products, people, and ideas. Art can be seen as a tool for manipulation of the mind, the same way a scalpel is a tool for manipulation of the flesh.

You can watch my short film on YouTube:
http://www.youtube.com/watch?v=UDZBzXa6BUM