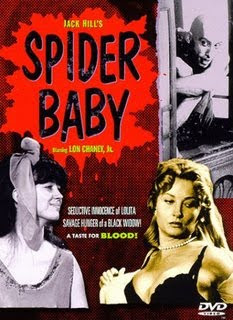 It's no secret that within the first few minutes of Spider Baby you realize that Rob Zombie was inspired greatly by this film. Heck- even a young Sid Haig resides in this creepy and unsettling family. 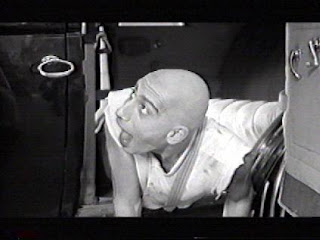 Spider Baby tells the tale of a family who suffer from a degenerate disease that makes them crave carnage and murder- acting very much like a spider attracting bugs to it's web. They are raised by the chauffeur Bruno who gets upset every time the girls kill someone- but always forgives them in the end. Ralph played by Captain Spaulding is a pinhead type-ish boy who likes to kill cats and serve them up for dinner. Virginia is the ultimate Spider Baby catching people through the window and slicing them up with her knife pinchers. Then there's Elizabeth, who seems almost too cool for comfort at times and is always the first to tell Virginia that people hate her.

The movie is creepy because as I always say an entire family of scary murdering lunatics is always much scarier than just one murdering lunatic. I loved the beginning scene with the mailman- and was shocked to see one of his ears fall to the floor after a nice slicing from Virginia.

The movie also has a bit of comedy in it however, which gives it a nice balance. I loved how creepy and perfect the two little girls were. The perfect balance of creepy and cuteness..Virginia's spider routine is shocking and insane and I loved it. The way she slyly seduces her uncle at the end was so creepy that I had to pray to the J-man to make it stop. Her terrible love for her pet spiders was just.....bleck......I really hate spiders. And two ugly tarantulas are the worst. They were my least favorite tarantulas too. The gross black and orange kind..... gaaah I feel creepy and crawly!

Now although I don't fully understand this supposed "disease" they have or why the uncle and whoever else those people were were kept in the basement, I still loved the overall vibe of this movie. It's like the very beginning of the exploitation movies we so love and cherish. A backwoods type family at it's humble beginnings. The dinner table scene especially is fantastic in this- like when Elizabeth serves up the "salad greens" and it's just a giant bowl of weeds and grass...hahah. And of course the grilled cat, or "rabbit" ooh it's all so horribly wonderful.

The ending although predictable was just plain fun you had to know the disease couldn't just end there. And Bruno's solution to his spider babies? HA brilliant. What an enjoyable classic!