Night of the Living Dead (1990) Who Knew a Butch Haircut Would Make Barbra Less Annoying and Whiny?! 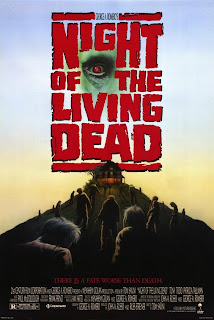 The original Night of the Living Dead made me appreciate zombie's for the first time- well for the first time ever really. I wondered what this whole little thing called a remake would bring to the table and other than it being in color and some goriness, it's pretty much the same exact film- which isn't necessarily a bad thing.

Since we all know the story of the Night of the Living Dead I don't really need to go into plot details. What I found myself loving was the re-imagining of the zombies- especially the autopsy zombie in the beginning. I thought it was a pretty decent change to not just have the one zombie in the beginning. I loved seeing the coffin open in the cemetery- and empty. The only thing that really made me nuts was Barbra's butch and awful hair cut. I guess I just don't really understand how that style haircut was ever considered to be in style. We saw it in Pet Semetary, Single White Female and now this and it just has the power to really ruin a movie- but not so fast, because with her new butch haircut happens the most important and wonderful change to the original. Barbra isn't a mute, hysterical annoying biotch- she's an ass kicking renegade! This was probably my only real problem with the original. It was so annoying the way she would freak out every 5 seconds. I was always surprised that Ben didn't just shoot her. But in the remake she is a badass who knows how to wield a shotgun and kill those zombie assholes. She also discovers the key to the zombies- that they walk as slow as fuck. She's a genius- and a hero!

Tony Todd as Ben was very exciting to me- since I love Candyman. I don't think anyone will ever replace the original and how groundbreaking it was for a black man to play the lead in a movie- not to mention Ben in the original is the best hero on the planet- so Tony really had big shoes to fill. I wasn't really wowed by him but he was pretty decent and strong willed and just plain strong as ever... until he succumbed to zombie aids...lame. I wish Barbra and Ben had made it out but I guess we can't have it all.

The other change I liked was the redneck celebrations at the end. The zombies hanging in the tree was really creepy, and those rednecks are just as scary if not more than zombies. I also loved when Barbra shot Cooper and was like 'another one for the fire' HA I laughed out loud. A wise decision I couldn't agree more with that's for sure.

Overall the remake makes some really good changes that really add a certain oomph that the original sometimes lacked. It keeps things interesting and tense for most of it and gives each zombie a uniqueness that I find very entertaining. I still don't really like zombie movies but since this was a remake of a classic I had to see what was up. I still don't know how I feel about Barbra suddenly becoming the main hero but I can live with it- butch haircut or not the woman can kill a zombie. This remake kept everything that was great about the original- which makes sense because why change what is already amazing?
Buy Night of the Living Dead at Horror Movie Empire!

Even though Savini's "re-do" is far from perfect, this movie has always held a very special place in my heart, and to this day I'll re-watch it at least a couple times a year (I've even turned my 10-year-old son on to it, and it's become one of his favorites . . . I know, this does leave my parenting skills in question, but hey -- my parents took me to see the original HALLOWEEN when I was five, and I turned out okay! :)).

Even if I didn't dig the movie so much, NIGHT OF THE LIVING DEAD 1990 holds a lot of "sentimental value" for me. It ranks among my favorite theater-going experiences of all time. It was released my senior year of high school, and I remember my friends and I got lost trying to find the one theater in western North Carolina that was actually playing the movie. We finally found the place, and it was a real shithole. We were scared to death that we were gonna get mugged or worse just walking into the theater . . . and that atmosphere made the movie all the scarier.


Great review, BTW! I'm a huge fan of your blog. One of my favorites on the intranets.