Phenomena: Whatever Jennifer Connelly, I Can Talk To Bugs Too. 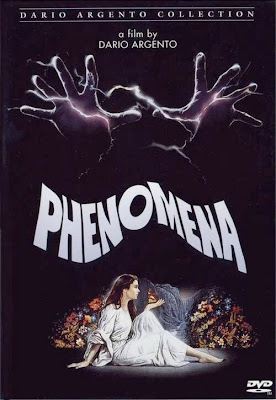 I'm pretty floored by how much I enjoyed this film. Not only does it have our friend Jennifer Connelly in it but it also stars our old buddy Dr. Loomis. And who better really to take us on a magical journey of horror? Oh plus this movie has a Monkey that totally wins the MVP award of the movie. We'll get to that later. Now about that bug talking thing...
Jennifer Connelly is the daughter of a famous movie actor. She's been sent to an all girls academy in Europe in the very same town where some pretty violent murders of young girls have taken place. We soon find that Jennifer has an unfortunate habit of sleepwalking- especially on dangerous pieces of architecture. And what's even more- Jennifer can talk to bugs! Well she has some extra sensory connection with them at least. She can ask them to do things and they come to her aid in a moment's notice. They also help her find lost evidence from all these murder cases. Dr. Loomis then employs her to help him nab the killer with her strange ability.
The atmosphere in this movie like many of Argento's is so secluded and seemingly cut off from the real world that it's pretty breath taking. Those shots of the hills and those winds are just really mind blowing. Something about it is so miraculous to me...it's a strange PHENOMENA that only happens to me when I watch an Argento film- save for Mother of Tears...bleck.
The kills and the blood weren't as graceful as usual and there was really only one that stood out but I think this films main strength is the idea of it all. A girl with unconventional psychic powers that allow her to talk to bugs and uncover the mystery of the serial killer?! While I did miss the extravagant blood I did gain a bigger appreciation for the little things. Things like how the bugs were almost supporting characters throughout the film- and even how the wind could almost be considered one too- it's presence was just so alive.
The ending and the reveal of the killer didn't come as a total shock. But that part where she sees the shadow of a little boy and then goes over to talk to him and it's just a doll...really...really creepy. Although not as creepy as the scary running doll in Deep Red...seriously what the fuck is that?!
While there are some moments where I find myself scratching my head- for instance did Morris serve any purpose at all? Or why does Jennifer feel like she owes Sophie something- when Sophie was a crappy roommate who made fun of her and abandoned her sleep walking watch  post??? Also why does the "killer" go out at night killing people anyways? The lack of explanation in that aspect was somewhat alarming- but I still largely enjoyed everything about the film.
The best part hands down  of course is the end. Should I say it? Ok I'm just going to say it. The fucking monkey saves the day... brilliant, just brilliant. I honestly think that if I could end every movie with a monkey coming out of nowhere and taking out the bad guy- I would. It's perfect.  The killer was a little...ehh and I felt like his backstory and the whole patient breaking into a mental asylum-getting knocked up- giving birth to a mutated crab face child could have been a bit more prominent. But overall this is one highly entertaining and engrossing film.
EDIT: I forgot to mention the most disturbing part of this movie...When Jennifer falls into the pit of rotted dead bodies and maggot slime!!! Holy Jesus I really had to tell myself not to vom all over myself...it was....it was just horrible. Ok that's all.
Posted by Andre Dumas at 10:09 PM