Drag Me To Hell: The Return of Nauseating Liquid Spewing Demons and or Old Gypsy Ladies. 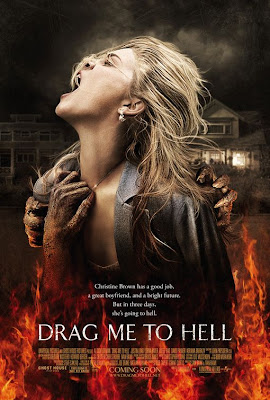 I'm going to admit something that I don't like to tell people openly. I, Andre Dumas don't really like the Evil Dead that much. Yes yes spare me your shock and horror, but it's sadly true. Drag Me To Hell is in many ways a return to Sam Raimi's Evil Dead style of combining horror, comedy and over the top everything, and it just happens to work- that is unless you've never seen any of the Evil Dead's.

Christine is a lowly bank worker who desires the coveted position of assistant manager. The desk is glorified in a ray of hope- don't tell Christine but it's basically the same desk she has now only it faces a different way. She is criticized for not being the super employee that the new guy is- and she even overhears her boyfriend's mother's speakerphone conversation (again, not so hard to do when you use SPEAKERPHONE cough Justin Long) saying that she expects her son to end up with someone who has a little more direction and promise. Poor Christine.

One day a creepy old gypsy lady asks for an extension to pay her mortgage. Christine decides to man up- balls to the wall- and tells that old gypsy lady no way. Personally if it was me, the conversation would go more like "Get your rancid dentures off my desk marbled eye biotch....And cut your nails too." Then I'd probably kick her in the vagina. Christine however is timid and gets all worked up when the old lady revolts and tries to strangle her.

Ok I kid that is fucking scary. Anyways later Christine meets her in the parking garage and the old lady rips a button off of Christine's jacket and curses her!

So the rest of the movie is Christine trying to evade the curse and some goat demon to avoid being well- dragged to hell.

The balance of scary and comedy is very good in this movie to the trained Sam Raimi eye. During the parking garage scene I had to slap myself to remember that I was watching what was intentionally over the top and insane. Then I remembered to chuckle and all was well.

I think maybe the problem that I had with the movie was that the comedy was at times so subtle that I found it difficult to decipher if it was intentionally outrageous or if Christine was just a really bad actress. For the most part however- the talking goat, the endless bodily fluids that end up in Christine's mouth- it's all fabulous fun and brings me back to gawking at the amount of blood that spews out on Ash's face with that whole pipe in the basement issue.

And call me crazy but that scene when the fly flies into her mouth and Christine wakes up with a start then eases herself back down and the GYPSY LADY IS THERE AND RANCID LOOKING is still really scary. It scared the shit out of me in the preview and it still scared me just as much if not more when watching the actual film.

Of course there are low points like some of the shadow effects got kind of old, killing the kitten was..... unnecessary, she didn't give the button to the mean Asian guy, but she did consider giving it to an old dying man breathing through an oxygen mask....? Oh and the whole ending mix up.

Actually I kind of liked the ending because A. the scene in the graveyard was priceless. So much angst and well warranted and deserved on the decrepit gypsy lady's part. And B. after realizing that she was going to give the button to the oxygen masked old man I decided she kind of deserved it. Although I will say that her character was unfairly cursed. Had she turned into a nasty and evil person (killing her kitten aside) I think the ending would have been more justified. But honestly I'm just not sure now....hmmmm any thoughts on the matter? I'm still grappling with whether or not I even liked the movie. I guess it's my inner battle with never really enjoying the Evil Dead movies...gah maybe I'll just sleep on it.

Oh and now I have an irrational fear that someone's going to give me a button for my birthday tomorrow. Great.
Buy Drag Me to Hell at Horror Movie Empire!

Labels: Ghosts and Spooks, Horror Comedy, Not bad not great

im not sure how i feel about this either...i loved the first 30 minutes, especially when the old lady attacks her in the car parking lot..but after that, it became a little boring and predictable in some parts... overall, a decent film but i think overrated.

I actually quite liked this. I saw it on the big screen and was jumping all over the place.
It is scary and I like the fact that it isn't always visual. When the the demon is in the girls house you don't actually see it but we know it is there and it is a bloody scary and creepy feeling.
Then later we actually see the demon as it possesses the goat etc.
I thought that was well done and this movie did genuinely frighten me and I walked out wishing I hadn't put myself through the experience!!