Trick r Treat: That is One Sharp Lollipop. 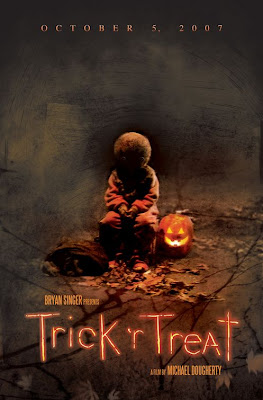 I've been hearing talk about his movie for months now and I had no clue what it was. The little boy on the cover looked like Tomas from The Orphanage and I was angry that someone had stolen his burlap sack. When I started reading more about the film however, I decided that I had to see it and understand what all this hype was about. Fans go crazy for a Halloween themed movie that is not Halloween. The closest I ever got in fact to the sort of the thing that gets touched upon in the movie is an episode from Are You Afraid of the Dark? Trick r Treat however is a delightfully entertaining movie that perfectly couples the creepy vibe of Halloween with the saying that you should always expect the unexpected.

The movies tells 4 separate tales of horror that end up all being connected to the same burlap sack little boy. The tales at first all seem to be some stereotype or urban legend aspect of Halloween and you start thinking to yourself what the big deal is? Sure we've seen the typical don't blow out the jack-o-lantern or you'll die trick, or the watch out for poisonous candy warning- but this movie takes those stereotypes and turns them on their head. I kept trying to guess what the outcome of the stories would be and I failed miserably each and every time.

My favorite story was probably the principal's. A particularly ugly boy is smashing pumpkins and stealing candy and just creating all around shenanigans by his lonesome. He happens upon a house with the always wonderful pot-o-candy and a sign that says please take 1. The boy of course shovels all of the candy into his bag but is suddenly surprised by the presence of who else but his school principal. The principal reprimands him then tells him to join him on the steps to carve pumpkins. He whips out a huge knife and we immediately think oh right the principal is a murdering psycho. The knife it turns out however is really just for carving pumpkins- and the principal does so after giving the kid a candy bar and telling him how he used to be just like him- that is until his farther straightened him out. The kid then starts to cough and gag and begins spewing a lovely mixture of blood and chocolate all over the front steps. The principal smiles and says ah yes and you should always remember to check your candy. DUN DUN DUN he IS a murdering psycho!

That story of course doesn't stop there- but I don't want to go into too much detail. The ending of that scene is really great though and I felt it was probably the creepiest out of all of them. There are endless creepy parts though- the bloody dead girl left on the sidewalk, the writing in the old man's house, the eerie song in playing in the background, the way the idiot savant girl walks away calmly from the scene of her "friends" demise.

The other great thing is that all the stories end up tying together in some shape or form- and they do it all very subtly. They are out of sequence which is a fun thing to play around with but when they are all put together with that final scene- you realize that the film you have just watched is smarter than you think. The beauty of it all is that the movie never takes it self too seriously, it knows it's playing stereotypically creepy halloween music, and giving you a few really cheap thrills and scares- but it also does much more than that. I really came away from this movie being impressed. Not wowed like in Martyrs but very pleasantly surprised.The only only thing I could have done without was the revealing of Sam. Too puppety and not thrilling or unexpected all. Seriously Sam cover it up please.

I suppose you could say that this movie tricks you into thinking it is a typical scary movie, typically set on Halloween- but it is so much more.

Sam is my favorite horror character in years... I had to get the action figure for my cabinet of villains... (The Neca 5 inch figure was the closest to scale with my 12 inch figures) I also have the movie on my computer... the Doctor
I have done a few posts on Sam on my blog "Dr. Theda's Crypt" Check it out...