I Spit on Your Grave/Day of the Woman: Damn Those Backwoods People and Their Lack of Manners. 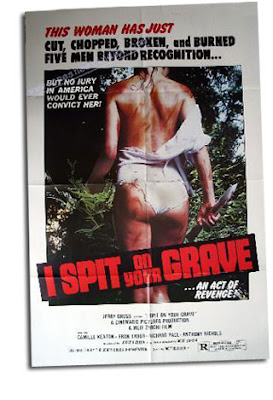 I Spit On Your Grave is a revenge film at it's finest and also a powerful take on feminism. While many people find it hard to look past the brutality of the rape scenes- they are failing to realize the overall outcome of the film. So what if Roger Ebert called it the "worst film ever made", he also gave two thumbs up to Speed 2: Cruise Control. Clearly the man is not to be trusted.

Jennifer is a writer working on her first novel in her rented summer home in some woodsy area. She meets a few nice townsfolk who seem pretty normal and really not all that backwoods-like. They aren't even close to those in Deliverance which is probably what makes the rape scenes so unbelievably gruesome. Anyways- Jennifer settles into her summer home and one day while sunning in a canoe, two of the boys round her up with a motor boat and pull her canoe to the far off side of the lake. Here she is pulled from her boat and stripped and beaten then raped by the lead guy. After this she runs away- only to be met again by all the men who once again rape her. After getting away a 2nd time she tries to call for help once she reaches her home but is interrupted by-you guessed the men once more. Oooh and raped. Again.

After barely escaping with her life, Jennifer rebounds faster than any rape victim in the history of rape victims, and plots her revenge.

As I said before, what makes the rape scenes truly unsettling is that all the men appear to be quite normal. They aren't toothless hicks who force grown men to oink like a pig before sticking it in their butt. They just truly believe that what they are doing is 100% A-OK. Even their conversation the night before while fishing never really spells out that they are going to rape someone.
What is even more unsettling is the fact that they let her go 3 times. After the first rape I kind of thought, "that's it?" But then bam rape number two, and bam bam rape number three. And also the actress who plays Jennifer is extremely extremely convincing. You could truly feel her anguish and her screams almost ripped through your body.

Now the revenge sequences I thought were pretty damn good. Although I kind of questioned her decision to kill Matthew, but I suppose in the end it had to be done. He still did it and even though he was egged on, he did jump in on the fun a bit suddenly...so yeah I don't trust him.

The best revenge and probably the best scene of the movie is the bathtub scene. The red of the blood mixed with all those bubbles is pretty impressive and almost gives Argento's blood a run for his money- but not really because that would just be preposterous. Then the way Jennifer calmly locks the door and settles down in the chair to enjoy some nice classical music, with the guy screaming in the background...I just really thought that was well done.

My only real complaint about the film was how quickly she bounced back. And how she just took a bath afterwards and laid down in her bed. There is no way she could have known she was suppose to have been killed and that those men wouldn't be back. It doesn't entirely make sense that she wouldn't jump in her car right away and go to the cops immediately. The scenes after that- her taking a stroll in the meadow, and her continuing to write her novel are kind of like....ummmmm hello? You got raped? A lot. But I suppose it's speaking to her strong character as a woman and her abitlity to move on with her life and not let what happened to her destroy her as a person and all that. It still makes me raise a "I don't think this makes any sense" eyebrow.

The great thing about this movie is that you are always always on Jennifer's side. Even when you see that the gas station guy has kids and a wife you never for once feel sorry for him. You might feel a little sorry for Matthew- but when Jennifer has had her last word you truly feel empowered as well. The revenge sequences weren't some cheap way to get people to watch a horror movie and go wild over violence and blood. They were necessary to the film and it's overall impact is a strong one. Jennifer comes away from the movie as someone who has literally whacked her rapists in the balls. Yes, she uses her sexuality to appeal to the men in the end but that is what they deserve- because nothing is worse than getting a boner and then having it cut off. Or so I'm told.

Buy I Spit on Your Grave at Horror Movie Empire!

Regarding her recovery, I kinda got the jist that she is gonna use this experience as fuel for her feminist writing. Also, she does stew around for at least a week (although it's not clearly stated), just because of the amount of time it would take to heal her wounds. I guess she was initially too shocked to call the police, and this eventually turned into anger. Also, if she had called the cops on them, we would have missed out on some awesome castration.

And yes, whoever your eunuch friend is that spilled the beans, they are correct that getting castrated with a boner is no picnic. Also, it's quite valiant of you to befriend eunuchs like that. You should get a gold star or something.