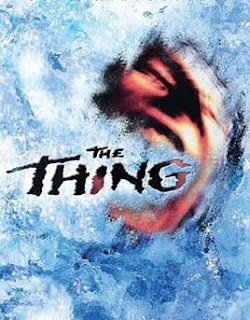 So yes I have finally seen The Thing! I've always been curious to know what drives people crazy about this movie so I moved it to the top of my queue. At first I was worried...stop trying to kill that dog mean Norwegian man! But I figured that in the long run,the Norwegian probably was right and the dog should have gone. Turns out my hunch was spot on. And PS was that really a dog because I was pretty sure it was a wolf...

Anyways, On the lonely ice planet of Hoth, scientists are staked out in their little bunker type place. One day a plane flying low tries to shoot a dog but fails numerous times. The men turn out to be Norwegian's and after being killed the team of researchers begins to discover what the Norwegian's problem really was.

They find a large crater that uncovers the remains of some kind of alien life form's space ship. It appears the Norwegian's unearthed an actual life form and thawed it out- and now they are all dead...hmmmmm.

It is not long before the "dog" starts acting up and turns into some disgusting blob of blood and squishy sounds. The researchers burn it and we soon find that "The Thing" is a life form that takes the shape of the organism it chooses. It's goal is to blend in- and if it succeeds in taking over the human race we will be done for.

Kurt Russell is the ultimate badass turned mountain man. He is serious about finding out who has turned into The Thing and demands that they be destroyed at once.

I found the most shocking scene to be the defibrillator scene- I think I had seen a clip of that before but completely forgot what happens. It was pretty amazing. Even though I called that fatty being one of them thanks to his comment about not wanting the leadership role because "he just wasn't feeling up to it"

Then the next best scene was the blood testing scene...talk about anxiety. Sadly, it reminded me of The Faculty but once I got over that I realized that The Thing is really a who are we really kind of movie. Kurt Russell never really trusts anyone- and rightly so because The Thing is just...gross.

The movie is overall a truly great time. It keeps you on your seat anticipating when the Thing will make it's appearance next- but it never manages to drag or leave you hanging. The ending is perfect- no last thrills, no insane plot twist that makes no sense- just the cruel and sad truth.

The only problem I had was that there were far too many men with beards and I had a hard time keeping them all straight.

Oh and that scene with the head using it's tongue to pull itself up and then sprouts spider legs and crawls away...wow. The squishy sounds may be gross- but they are entirely necessary and extremely effective. The Thing is not to be messed with that's for sure. It is just a vile, bloody, blob that sometimes sprouts weird dog heads out of it's stomach and has maybe 50 sets of teeth in different places. If that's not bad ass to you then I don't know what to tell you.
Buy The Thing at Horror Movie Empire!

I was scared there for a minute that I may have hyped the movie up too much for you... I'm glad you enjoyed it!!! And that computer at the beginning was a fucking cheater.

With most films whether or not I agree with someone on their opinion doesn't matter. Sometimes you agree to disagree. But there are a few films where if someone doesn't like it I have to wonder."What the f**k is wrong with you?" This is one of those films. Glad you liked it because if you didn't I might have had to ask the mighty question. lol

John Carpenter is God, he quite simply owns the universe.

Andre, the only problem with "The Thing" is that whenever you watch it you know in your heart of hearts thats its THE greatest movie ever made so it does kinda` make all other movies obsolete, by definition. Its literally like whenever you`re watching anything else you have to say to yourself "why am i wasting my time watching this when i could be watching John Carpenters "The Thing" instead ! ?".

The Thing should be banned. The Thing is the most repulsive monster imaginable. You need a vomit bag to see this. I cant eat after watching this. Its pukingly nauseatingly repulsive and gross. Its criminally repulsive. This movie is a crime.