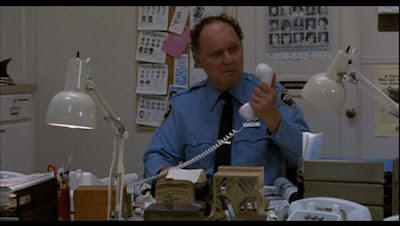 Let's pretend for a minute that everyone feels the same way as I do about Killer Klowns from Outer Space. Meaning it's the best cult horror movie in the world and still haunts each and every one of my dreams. Which doesn't mean by the way that's it's not still wildly hilarious.

Sheriff Mooney is all kinds of mean. He's one of those cops that likes to talk dirty. And it's especially surprising because it's not like this an episode of the Shield or something it's a quiet little peaceful town, where the biggest disturbance is a couple of nerds who say provocative things over an ice cream truck speaker. His meanness also probably stems from the fact that he's stuck playing his dean character in Animal House but I won't get into that.

Anyways- Sheriff Mooney HATES rabble rousers, hooligans, and rapscallions to say the least- oh and college kids surprise surprise. He thinks the whole world is a mess and that everyone needs to be locked up in his mini jail. So when the Killer Klowns come to town he obviously thinks that it's a joke. At first just our main characters come to complain about the Klowns. But soon- the entire town starts calling in on the phone lines. Mooney thinks it's just another big prank. Yes...a prank cleverly orchestrated by the ENTIRE TOWN. What's that you say Sheriff Mooney? You want to unplug the phones so no one can call and report any kind of emergency? Brilliant! It's no surprise then that pretty much the whole town gets taken over and turned into giant balls of cotton candy. Way to go Sheriff Mooney. We could have really used those extra policemen from Marlboro, especially since this town only has 2 cops. I guess he deserves to be turned into a human ventriloquist puppet after all. 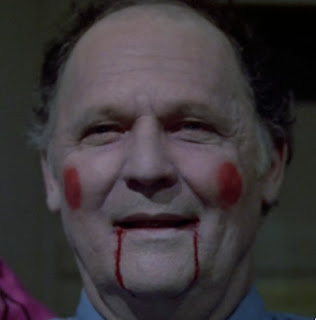