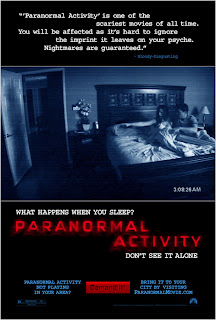 Finally I have had a chance to see the movie that everyone has been talking about. It's been a trending topic on Twitter forever and I had a feeling since I did enjoy and get pretty creeped out by the Blair Witch Project- that this too would genuinely freak me out. It could have been because I watched it in 3 separate parts spread out over 3 days, or because I didn't see it in the theater with the sound amplified to the nines, OR because my version was not the theatrical version and therefore didn't end with the big ending that everyone kept talking about- but after those last few minutes ticked away, I found myself wondering- "That's all?"

I think that people were affected by this movie for a number of reasons. The first being that it responds to a primal fear of all us- the dark and hearing a bump in the night. It sparks that whole feeling of being 5 years old and dreading going to sleep because that's when the monsters or vampires or ghosts or whatever else may get you, comes out. Even as an adult, being alone in a house can still spook me quite a bit, and so Paranormal Activity takes those feelings and fears and serves it up right.

Had this not been filmed a la documentary style it would have bombed, because it would just be like every other ghost horror movie out there. The documentary style like the typical "true story" marker gives it instant appeal and belivability. The fact that there are no special affects or CGI ruining it, is also a high point. But overall I think you really have to experience this one in the theater for it to affect you.

The sounds that happen during the night are only really scary amplified. I found them to be barely startling with my set up, and sometimes I had to turn the volume up and rewind just to figure out what the big deal was.

Another problem for me was that Micah was really annoying. This is probably only because he sounded exactly like Jim Halpert from The Office and I cringed everytime he made a sarcastic joke- and envisioned him cracking a half smile/ awkward face behind the camera. Besides his voice though, his actions also really bothered me. Why are you provoking a demon? Do you really think you are macho enough to take him on? It was obviously Micah's fault that everything was happening. He had to be a little sarcastic unbeliving shithead and the demon was not down with that. He is also responsible for the negativity. If he had just put the camera down Katie wouldn't have gotten angry and fights wouldn't have ensued. But the demon feeds on negativity and was also probably allergic to baby powder- so things got out of control.

The only parts that kind of scared me other than Katie's weird jewelry making, were when she was was dragged from the bed and when the door moved by itself in the very beginning.

The part that didn't scare me at all and made me laugh however- was the Ouija board part. Moving by itself? Sure why not. Bursting into flames? Come on. I seriously laughed out loud right then and there. Those demons and their pyromaniac tenedencies! It was just a little silly. Also I have such a hard time picturing demons. Are they half goat, or are they people with big teeth who spit out curdled milk? Do they have horns? Did those foot prints look hoofish? I just don't know about those demons. I almost think I would have been more scared if it was just an angry ghost. Demons immediately push the movie into this other realm that's just a little too serious.

I want to say that I was scared beyond belief, and that I had a hard time sleeping- but I just can't. I want to tell you to believe the hype and confirm that this is the scariest movie I've seen in years- but I really can't. And I'm sad about it believe me. As someone who got pretty frickin scared by the Blair Witch Project I figured I would be screaming for the hills within the first few minutes, but I was more interested in figuring out why their house was so nice when only one of them had a steady job. Yes my ending was the original ending when premiered all those years ago and probably no where near as scary. But overall I just felt a huge feeling of disappointment. Bah I'm going to go watch Aliens!

Alright, this film scared the crap out of me, especially that ending. If only it had the same thing Blair Witch had going for it, where people thought it was actually real.