The Last House on the Left (2009): Put Your Goddamn Shirt On Sadie Your Boobs Suck Anyways. 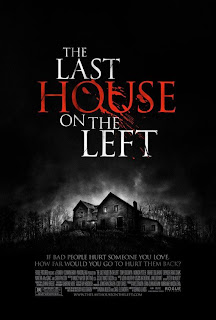 I must say I was extremely dubious of remaking The Last House on the Left. Not because the original was a fantastic film- but because it's such a landmark in horror and Wes Craven's career. I feared people wouldn't understand the film and only equate the title with the remake- and I'm also just trained to believe that remakes are usually always terrible. But the movie did feature one of my secret crushes- Jesse from Breaking Bad- so I figured let's give it a shot. Oh that and I had heard it was a pretty decent remake.

Right off the bat I liked how they began with that look into Krug and his posse's life. It showed us immediately what kind of people they are, and more importantly what kind of people they will be as the movie progresses. Holding up the picture of the cops children and then killing him while his blood dripped all over the picture was really a pretty genius move in terms of setting the audience up for what they are in store for. These are people who have absolutely no remorse and no feelings of guilt and no soul really. And that may be the most dangerous kind of killer.

Now I was immediately put off by the fact that my look alike Martha MacIsaac was Mari's friend. 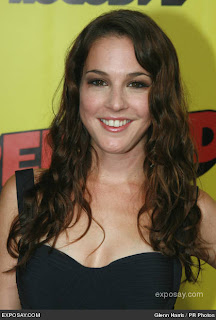 It honestly really really creeped me out. I didn't see the resemblance in Superbad but I couldn't stop freaking out watching this. Of course when Jesse from Breaking Bad started getting all touchy feely on her/me I have to admit I got a wee bit excited. Is that wrong? Probably. But it was still a really exciting 5 minutes of my life. Oh look here is me being held at knife-point and Jesse from Breaking Bad is touching me and whispering sweet nothings into my ear! 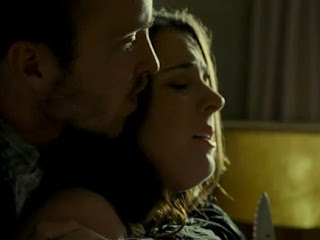 Siigh...I may just have to frame that and put it on my wall...

Anyways. The movie overall didn't make too many changes that were vastly different from the original. They cut out the really really uncomfortable perversions like making the girl pee her pants, and the girls have sex with each other, and the disemboweling part- which lets face it probably wouldn't have faired well for this movie in these times. That isn't to say however that the rape scene was less excruciating, because I think it may have been more painful. It was almost too close for comfort. Not that any rape is comfortable but you know what I mean. Hearing those..."sex noises" were really creepy. And it went on for like 20 minutes! It was completely in your face but without it- I'm not entirely convinced we could have hated the gang as much as we were suppose to.

Now the only real massive change is Mari's escape and entry into her own house. When I caught a glimpse of this in the preview I was absolutely appalled. I don't know why but I really thought it was going to ruin the movie. I'm still kind of unconvinced whether or not I like it. I think in one way- it gives the parents better motivation and proof- but on the other a dead child is a much deeper reason to provoke the type of revenge that the parents have. Maybe if Mari had crawled home but then died in her parent's arms? I dont know. Something seemed kind of not right there.

Other than that I really can say that I enjoyed this remake. I felt like the characters were fleshed out in particular Justin/Junior's character. I really felt for the poor kid and he wasn't just a bumbling moron. And the sad music although a little over dramatic at times sort of got me right in the heart (shhh don't tell anyone). Seeing Mari get shot while trying to swim away was still just as surprising and heartbreaking as it was in the original. It's like every time I watch Psycho I get that strange main character emotional bond to Marion and I still think for a second- that maybe she will be OK this time.

I only had a few major problems with the movie. One big one for me was Sadie's character. She was much better in the original because she was pure bat-shit crazy. In this she just annoyed me- and had her shirt off way too much. Seriously? I'm sure they decided in order to get people to see this they had to temp the teenagers with the boobies but it was annoying. She was more like a nudist with bad mood swings when she should have been a complete bat shit crazy person who likes to play with people's intestines.

And my other was the very last scene. Firstly- the Dad checked Krug's pulse I'm pretty sure. Secondly- when did he find the time to do that? And thirdly- it was so so so unnecessary. It was like they finished making the movie and then thought "crap...there isn't enough gore! quick lets blow up someone's head in a microwave!" It kind of almost made me resent the entire film because of it. Bah to unnecessary gore!