Zombieland: The Greatest Hundred and 20 Minutes of the Year. 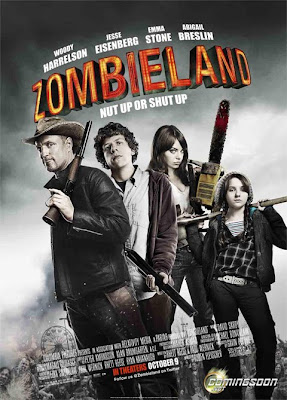 I have a strange phobia of not watching horror movies in the movie theater. I don't enjoy being really scared in public and I like to have the buffer zone of a pillow or a mute button in case I get too scared. Yes I am a wuss. But when it comes to comedy horror movies and oversized sodas how can you resist? Despite my experience being slightly ruined by a bunch of brosephs from surrounding Boston colleges plus yet another preview for the movie 2012, the night was a seemingly perfect mixure of comedy and thrills.

At first I was a little worried that the poor man's Michael Cera would annoy me and that Woody Harrelson would be too douchey for his own good- plus I really hate Abigial Breslin. Turns out only one of those feelings would end up being true. Abigail Breslin is still cringe worthy and ugly. Yeah I don't care if she's 12 she still sucks.

The movie opens with laughs and doesn't stop until the very end. Perhaps the best element of the Zombies is that they aren't some rotting smelly corpse rising from the dead- they just have mad cow disease! Which is something that probably could happen. There's jokes about fatties- which I always find refreshing, toliet humor, and slow motion opening credits. The thrills are scary and fun at the same time. The blood and gore is over the top and fantastic. The zombie kills are original and just plain amazing. Woody Harrelson is like a better and less annoying Matthew McConaughey, the Michael Cera look-a-like has more depth and soul to his whiny/nerd character. Everything in this movie is a better version of something else-except of course for Abigail Breslin who just plain sucks.

Zombieland manages to keep you entertained for the entire time- which isn't that long considering it's only about an hour and 20 minutes- but the beauty of that is that it doesn't feel like a short movie. There's so much packed into that hour and 20 minutes but it still manages to be well spaced out so that it's not overwhelming.

The Pacific play land segment was incredible, using the tilt-a-whirl as a zombie dispatcher? Genius. Shooting zombies from a roller coaster? Genius. Using twinkies as a major plot device? YES. The surprise introduction of one of my favorite actors of all time? Probably the greatest 10 minutes of my life.

There's nothing bad I can really say about the movie except that Abigail Breslin was awful. Even with her one redeeming line about Hannah Montana she was just blah. She can't be little miss sunshine forever people- and I hate to break it to you but she wasn't that good in that movie either. She was ONLY good in Signs and that's because she was too young to think about acting- she was just saying lines and not trying to be an uber cool hipster.

Anyways- so many good lines that aren't pretentious and over done. I don't want to give anything away so I'll just say that seeing this movie will be a great time that even Abigail Breslin can't ruin. So get out there and see it ASAP.

I could not agree with you more... I haven't cried that much since Titanic. ;)

Love your blog, by the way. I'm a horror movie buff as well. Your reviews are just plain awesome. <3

Ha ha ha!! A horror fan that admits she doesn't like horrors on the big screen. Admire you for admiting that on a horror blog!
But I'm the same! I'm not overly fussed on big screen horror and wait for its small screen cousin because I can do the same with the remote!!
But I love horror/comedy because they aren't jump in your seat scary.
Zombieland is awesome and I loved every moment of it. But how f&*King stupid is Bill Murray to act like a zombie and wonder why he gets blown away??!!!!!!