Funny Games: Seriously Paul- Your Shorts Need to be a Little Shorter. 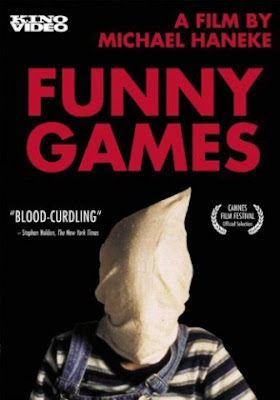 The first time I saw the movie cover for this- I thought maybe it had something to do with the KKK. But no no it was just that crazy Paul putting a pillow case on little Georg's head so that he couldn't see his mom get naked. Who knew?! The people on IMDB go nuts with movies like this as the discussion board is usually filled with "How can anyone sit through a movie like this" "Most horrible movie you've seen?" "You people are sick to want to watch a movie like this" And to them I say maybe you should watch Martyrs or perhaps Cannibal Holocaust or even Mother's Day. Heck I can think of 20 movies that are more disturbing and emotionally affecting than Funny Games. That isn't to say however that Funny Games isn't a great movie.

The beginning has a nice feel of some kind of public access TV show. A nice German family arrives at their vacation home, a German Shepherd (Ha! Those German kooks) roams the house which should immediately tell you that I will need a box of tissues soon because that dog will NOT be around for long (Note See Single White Female post)....and things are just peaceful. Soon a pudgy man walks in the kitchen and asks for eggs for the neighbor. He even knows their names and the wife had just seen him talking with her neighbors- so what's not to be trusted? For me it would be the gloves. Right of the bat I would know something was up. Kind of like when Patrick Bateman dons his plastic poncho. 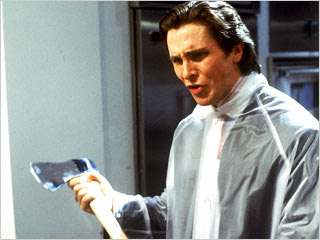 Change in dress code? Get the fuck out.

Anyways the fatty keeps dropping the eggs, the wife gets pissed, the husband intervenes, Paul and his short shorts come in- he hits the husband with a golf club. The dog ends up dead (shocker) and the two intruders hold the family hostage and force them to play a few "funny games".

To be honest when I heard the term "funny games" I was ready to jump out my window in fear it would be reminiscent of Saw and that whole bogus philosophy. Turns out, this movie is a hell of a lot smarter than that. This movie- plays God. It breaks the fourth wall. Paul has conversations with us!! He asks us our opinions- and he can even rewind a scene that he doesn't find pleasing. This does two things- sort of creeps us out, and tells us that no matter what this family does- they are fucked.

Ok on to things that were wonderful. The little boy SPOILER getting shot. Fantastic. A. I kind of hated him and B. that blood splatter on the wall was amazing. I also loved how it happened off camera. In fact all of the brutality happens off camera, which is very interesting when you take into account the whole breaking the fourth wall barrier and how it reveals things.

I also enjoyed the blood dripping over the TV set, how the family could have escaped a million times- but didn't, how their house door locked from the outside, and of course Paul's short shorts.

I still can't figure out why their house door locked from the outside- or why they couldn't just slip out the window. Also why is everything frickin locked around this place? The gate? Maybe put a little effort into kid- a running jump is really all you need. ALSO you have a boat outside your house- hop in and get the fuck out of there.

Another distressing point is that we find our main character once again fooled by trying to get help from a passing car. What have we learned from films like; Frontiers, Sleepaway Camp, Friday the 13th, House of 1000 Corpses and The Goonies? The bad guy is always out there looking for you in his car. Smarten up.

My final thoughts are that it was a highly thought provoking film, and that I ended up really kind of liking Peter and Paul more than the family. Perhaps it was the breaking of the fourth wall or Paul's flashy smile- or maybe they were just better designed characters. The hopelessness feeling is eminent almost from the very beginning, but nothing Peter or Paul did was really that distressing. I mean he covered up the kid in a pillow case while his mom got naked for Christ's sake- the man has some decency. What makes Peter and Paul scary is that we really have no idea why they are doing what they are doing-which I've said before is one of the scariest traits of a horror movie villain. You should always run very hard and fast from the unknown and the just plain crazy. And if someone ever asks me to borrow eggs- I'm kicking them in the nut sack.

michael pitt can play a very convincing psycho remember that shitty sandra bullock movie murder by numbers? (and also boardwalk empire)and why hasnt anyone commented on this movie? and more importantly why am i writing about it when nobody will ever read it? also can i borrow some eggs?

You're commenting because it's AWESOME?

oops sorry i was commenting on the remake with tim roth and naomi watts ive never seen this original german one but the fact that it is from germany and has people speaking german in it prolly makes it more disturbing.