Black Sunday: I Need The Number of Asa's Embalmer. 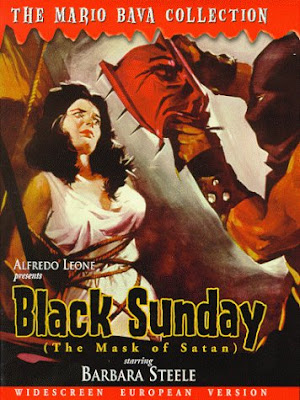 As much as I sort of hate Bravo and how they generate their Scariest Movie Moments lists- they are partially responsible for my awareness of many of the horror movies I know and love today. Black Sunday is definitely one of those films- and even though the little clip they showed made me think it was a historical fiction account of witch burnings or possibly the Spanish Inquisition- I was still intrigued by what I saw- and that makes all the difference.
Two centuries ago, a condemned witch named Princess Asa was killed along with her lover. Before she is brutally killed she speaks of a curse that will befall her brother's descendants. Before their bodies could be burned and destroyed however a great storm appeared and extinguished the flames sending the townspeople into a panic. Now 200 years later Asa, after being replenished with blood, has risen and seeks revenge on the family of her brother- and her family too now that I think about it.
The most thrilling thing about this film to me is the atmosphere. The atmosphere in Black Sunday is one of the creepiest I have seen- especially in a black and white film. There's something so genuinely scary about the setting that truly adds to the overall impact. The beginning- also know as the part Bravo chooses to highlight is surprisingly gory- and heck it made me want to see this movie in the first place. In fact, there is a surprising amount of gore throughout the movie; close up burning or branding of the flesh, close up holes in skin and of course the ultimate- DIESEL hammer to the mask lined with nails. Holy Moses that scene is intense! I love the close up shot of that mask being put on Asa's face- and how it places you in her perspective- the mask practically being placed on your face as well. And then seeing that hammer....and the force that hits the mask- the scream and the lovely and beautiful spouts of blood that shoot out? So awesome.
There are also some stunning, stunning shots and scenes. The first time we see the corpse of Asa's uncovered and all the scorpions crawling in and out of the vacant eye sockets! 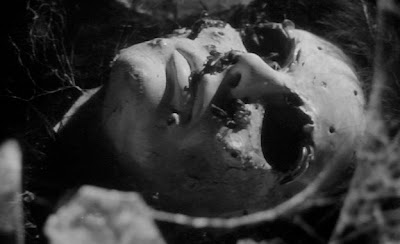 And then later the eyes moving back in forth- something about that shot really shook my nerves in just the right way...

There is also this incredible scene where the little girl sees the coach approaching in the woods- and it's going in this extremely eerie sort of slow motion type of pace. It's possibly the creepiest thing I ever seen- creepy, yet beautiful and just amazing.

Barbara Steele is also a lovely wonder to behold-and here she is used in one of the first instances of the "Parent Trap" style of filming. Funny as luck would have it, B-Sol at the Vault of Horror just did a post on The Many Faces of Barbara Steele- so go check it out!
Black Sunday is a classic that should be a staple in every horror fan repertoire. I was really mad to find that the DVD version I got recently did not have a subtitle option. If possible look for one that has it because the dubbing is sort of heinous- as all dubbing is. Which reminds me- I get a serious kick out of movie fans who don't have "time" to read subtitles. Are you for real? I know reading when watching a movie is really a lot to ask..... bah. The world is going to shit.
Buy Black Sunday as part of the Mario Bava Box Set at Horror Movie Empire.
Posted by Andre Dumas at 10:53 PM