Pigs: Turns Out Is NOT About Killer Pigs. Disappointing. 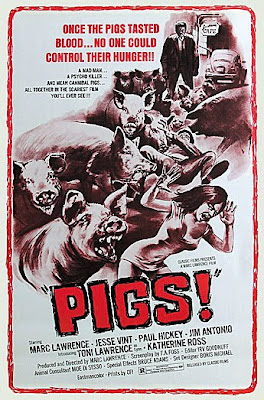 The cover of this movie says it all as clear as day. A hungry and vicious looking horde of pigs attack a woman, their pig teeth (?) snarling, the tag line reading, "Once the pigs tasted blood...no one could control their hunger!" So immediately one would think- Yes! Pigs that kill people. Yes! But sadly no- Pigs is really just about some fucked up woman and an old man who covers up her crimes by feeding the bodies to pigs. Not as cool as it sounds believe it or not.
Lynn was sexually abused by her father- until one night she brutally murdered him with a knife and was sent to a psychiatric hospital where she under went shock therapy. One night a nurse and the doctor get frisky- giving Lynn the chance to don nurse clothes and get the hell out of there. She steals a car and makes her way into some backwoods town where she takes a job as a waitress at a shady looking place. Mr. Zambrini runs the place and is rumored to kill people, and/or pillage cemeteries and feed the bodies to his pigs. One night, Lynn gets almost raped by a customer which sets her off. She feigns sexual attraction the next night and then brutally kills him. Zambrini helps her by cleaning up the scene and feeding the body to the pigs. Unfortunately the town, which seems to have a growing population of 5 people- starts catching on- and the only cop tries to put a stop to it.
So I won't pretend I wasn't sorely mislead by this movie's poster, title and tag line. I also won't pretend that I was positive this move was going to turn into a 70s low budget porn movie. I suppose the title could be used in a kind of Cannibal Holocaust way- who are the true pigs? The men who try to rape Lynn? Or is Lynn a pig in disguise? It's a strange idea that is in no way shape or form backed up by any part of this movie. Even the whole pig situation is the dodgiest thing in the world. Apparently the pigs become dead bodies because they eat the dead people? Or the pigs are actually people?
Basically pigs have nothing to do with anything. Lynn is a psychopath who is dealing with some PTSD and kills every living man imaginable. I actually kind of came to resent that fact that they represented Lynn in such a psychopathic way- because you aren't allowed to kill your father who has been raping you for years? What? You're not allowed to do that? Are you? Anyways- I guess getting raped elicits psychopathic tendencies and makes you lose any hope of recovering your true self again. I guess that's kind of an over the top analysis but I did think it was a strange choice.
The movie isn't great in case you haven't caught on by now. It's really dark. And I don't mean dark in a depressing meaningful tonal way- it's just dark as shit. Half the time I was squinting at the screen and trying to turn my brightness up more until I realize the movie was just fucking dark. Also the pig's squeals were probably the worst sound in the world. I'm talking a heard of elephants being run over by Optimus Prime with Miley Cyrus playing in the background-awful. I wanted to saw my face in half.
It was interesting to see this sort of spin on a back woods tale- where the supposed psycho hill billy is actually normal and the visitor is the psycho. Although- Zambrini really did feed dead bodies to pigs so.... yeah. I don't know anymore. This movie was all kinds of bad. Perhaps it was wrongly placed in the "Classics" section of Netflix or maybe I ate too many snowman cookies today and cannot appreciate classic cult film because of it. All I know is- I wanted to see some pigs fuck some people up and I got nothing. Instead I got an hour and 19 minute look into Lynn's therapy session.
So basically- I'd rather just watch this pig.
Posted by Andre Dumas at 11:32 PM