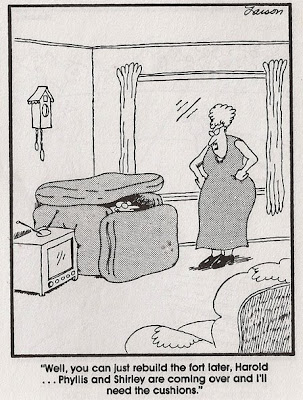 There are two things in life that will always make me smile. The Far Side and a well thought out movie title. All too often we watch movies usually titled with "The" and the most basic point of the entire plot. These- while appropriate aren't altogether fascinating to me. Sometimes movie titles are so perfectly named it fills my heart with joy...well maybe it just makes me happy. But in all seriousness titles can make you think about the movie on a whole other level that you may have not even realized. So here are 5 horror movies that have some truly perfect and fitting titles that you may not have paid much attention to before, but now you will surely start to spot the good ones. Please note bad titles do not make a bad movie- although that is often the case. It's just nice to get a little something extra in a place you would have never thought to look.

You know what I love about blues music? It's depressing AND enjoyable. You know what I love about horror movies where the mother kills all her children in the most merciless way possible? Because it's depressing AND enjoyable. Am I going to hell for saying that? Probably. But you must understand that enjoyable doesn't have to mean smiles and fun. Baby Blues tackles the taboo subject of postpartum depression and does it in a way that is both terrifying and awe inspiring. This title works so well because it takes those two elements and uses them in a smart way. Sometimes people get the blues after they have babies. It's simple, it works, and it also has different layers to it- hence my comparison to blues music.

This title is so simple and so perfect that it really hurts to think about it sometimes. Our protagonist has a baby inside of her. Obvious. The Antagonist is trying to get inside her house- suceeds then goes one step further by trying to get inside her stomach. Not so obvious. The idea of having your home invaded is scary because it's suppose to be a safe place- and the baby is suppose to be safe inside your womb which is like it's own little home. It's simple titles like this that really make appreciate the fine art of title choosing. Perfection.

I love this title. First off- the entire situation of this movie is a nightmare- children getting killed in their sleep, alcoholic mom's stashing knife fingers in their basement- Johnny
Depp sleeping on the job!? And then secondly- how does Freddy come to get us? In our dreams of course! And any dream that Freddy is in must be a nightmare!! Juust perfect. It should also be said that picking Elm street as the street was genius. There is an Elm street in just about every town- and for those unlucky few who resided on it...I'm sure their nightmares were slightly more terrifying.

The title of this movie tells you everything you need to know about the film- beginning to end. I love that it's not some pun or creative spin on a holiday i.e. Thankskilling, Black Christmas, Silent Night Deadly Night- it is as it is. How far does April Fools Day go before it stops being a joke? Is anyone really laughing along with the crowd when they fall for the saran wrap on the toilet gag? Is it really a joke or is it just mean? The movie takes on this question- while at the same time providing good old fashioned fun.

Punny punny punny. This is probably my favorite movie title of all time. Ginger really does snap- and snap she does...she snaps to the point of becoming a werewolf. Not only does she physically snap at people with her werewolf jaws- but her sudden on flux of hormones makes her snap at her poor sister who she so dearly loves. Oh the joys of becoming a woman and a werewolf. The title also plays on the fact that the ginger snap cookie can pack an unexpected bite. Sweet at first and then...SNAP. It gets you every time. Genius. Just genius. 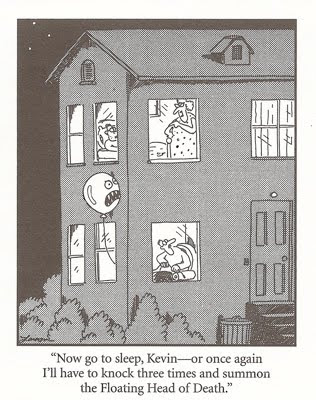 What about The Haunting (the original, not the crabs remake)? There's a title - or too obvious?

No no there are many many others that fit- these are just some not always noticeable genius titles. Someday I'll do a 5 terribly titled movies list!

The Haunting is a good one though- the haunting on the surface the ghost as well as the "ghosts" that stay with us forever- bad memories and experiences... Certainly a good and perfect title!

All great choices! If I were to nitpick, I'd argue that April Fool's Day isn't all that clever cause it's the same thing as Halloween, but its the simplicity implied by the title that makes the film work, so...maybe it is more clever than I thought?

I've always thought Ginger Snaps was a good title too! Because, er, she does!

I guess I was thinking that the outcome of April Fools Day is directly related to the title- Halloween less so I guess? I don't know now it hurts my head to think about!

I think I like it because April Fools Day is so jokey but you have to think if anyone is really taking things seriously or reacting in a poor way- hence that last "shock" of the movie.

I'm so glad other people out there remember April Fool's Day! I haven't seen that movie in ages, but now I want to go out and rent it!

That iconic scene in Nightmare with Johnny Depp getting sucked into the bed, only to have a geyser of blood shoot out -- it's so funny to think that he's such a great, serious actor these days, yet he was involved in one of the biggest campiest scenes of all time!

Not to go completely off topic but did you ever get the giant collection that had every single Far Side cartoon every done? It is huge but all kinds of awesome.

One of my personal favorites is the Midvale School For The Gifted with the kid pushing to open a door that has a sign on it that reads PULL.

No! Well I have one book that's pretty big but definitely isn't a full collection. That's awesome....maybe I should put that on my Christmas list?

I remember once I brought my Far Side book to the dining hall in college and was just turning pages and laughing out loud every second. People must have thought I was a real nutter.

Here's a link to it on Amazon:

It's expensive but it is huge.

Jeeeez when I'm rich and famous it will be the first thing I buy!