The Beyond: Creepy Ginger Alert! 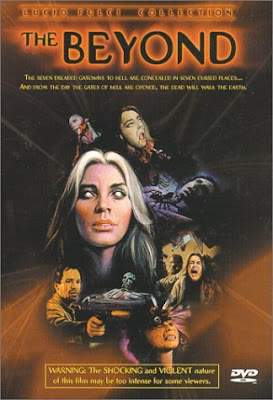 After watching several Italian horror films I have decided to give up on ever understanding what is going on- and just take in the beauty of the blood and the shots. The Beyond is one of those movies that has tons of lovers and tons of haters- and to be honest I'm not entirely sure where I stand. On the one hand there were many miraculous things happening- amazing death scenes, a nightmarish atmosphere, beautiful shots of blood- but on the other, there is bad editing, and prolonged scenes that do little except reveal the bad effects and makeup. I guess I'll have to come to my decision at the end of this post.
Every single synopsis of this movie that I have read is pretty much wrong. Even in the Bravo segment the person who explains the movie is 100% wrong. I'm not sure why this is, but I have a hunch that it has to do with how NOBODY understands what is going on in this movie. From what I can tell- Eliza has inherited an old hotel in Lousiana which happens to be located over one of the gateways to hell. When the gates are opened the undead are free to roam and whilst fixing up the hotel- many are killed by the ghouls who lurk in the underworld. The synopsis on my Netflix movie says the tenants get killed one by one- Bravo talks about how a man realizes his house is a portal to the underworld- it's all very dodgy but I'm pretty sure I have the gist of it.
Now the greatest thing about this movie I thought, was the originality of the deaths. Have you ever wondered what it would look like if you whipped someone with a heavy chain? 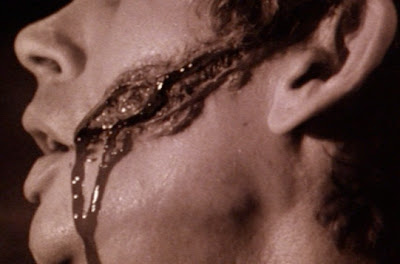 Pretty gruesome. I actually really enjoyed that opening scene and although whipping someone with a chain is not something usually done- it was really interesting to be able to see that happen. Another wacky death scene is when the mother of Joe the plumber gets all that acid dumped onto her face. While the effects are pretty shoddy- it's still enough gore and blood to satisfy the gore hounds. And then we have....the spider scene. I know. Another fucking spider scene. For some reason I felt it necessary to watch every movie that has a toe curling spider scene in it this week. And why does it always have to be my least favorite kind of tarantula (big, black and orange) why why why!!? That scene was horrific- although way too prolonged in my opinion- and a lot of the fake spiders were laughably fake. The scene was still quite effective however and is one that will stay with you for a long time.
One thing about all these awesome deaths though- is how strange the blood acts. Apparently falling a few feet onto the ground elicits a geyser of blood from your mouth that doesn't stop, and shards of glass cause explosions of blood on your face? Hah actually in that window breaking scene- the guy's face starts spurting out blood where there is absolutely no glass- it's a pretty good example of what I'm talking about. I wouldn't say the blood was excessive or over the top- it was surreal which certainly added to the nightmarish quality of the film and the overall sense of never really knowing what the hell was going on.
By the end of film I found myself scratching my head, trying to understand the concept of the beyond and what it actually meant. Not entirely understanding a movie however isn't a deal breaker for me- as I still can appreciate a lot of this film. There are many beautiful and horrific things about it- but it just wasn't anything that wowed me. I loved the eeriness of the empty hospital, and how all the zombie people cornered them. I don't know... maybe I'm just Argento biased, but Fulci just doesn't evoke the same amount of power that a lot of Argento's films do. Again, I think a lot of that has to do with the fact that most of Fulci's shots are really strange, and some of the scenes were unbearably and in my opinion unnecessarily long. Of course the total rip off of the dog scene in Suspiria didn't help things! There was a really cool idea in this movie but I didn't feel like it was as fleshed out as much as it could be. Superb death sequences and a few stunning moments did keep my attention though- but I still expected more!!
Oh two more things. Why can't people ever grasp the concept of shooting zombies in the head? That doctor with the gun drove me nuts. He even discovered that the shot to the head is what kills them- but he continues to shoot them in the stomach! Also- thank GOD he shot that creepy ginger girl. If I had to look at her creepy ginger eyebrows one more time I was going to vom.
Buy The Beyond at Horror Movie Empire
Posted by Andre Dumas at 8:26 PM

I'm sorry you didn't like it too much. It's my favorite Fulci film and I love it. I think it has such a great atmosphere to it.

Aw don't feel sorry Gory! I did get a lot out of it! And I'm looking forward to broadening my Fulci repertoire.

I really like this movie but besides knowing the hotel sets on top a gateway to hell I have no clue what is going on..and the ending makes me scratch my head lol

Hi again,
Second comment :)
Still loving the blog. It has in fact re-vitalised my love of horror.
Thank you good sir.
On the subject of Fulci's The Beyond. It seems to be a fairly coherent plot.... to me. I really cant see why everyone talks of it making no sense. I know a lot of horror films are watched between fingers or behind the couch or even while engaged in other distractions. Sure some of the plot seemed a little surreal but nothing that made me think 'What the Hell is going on?'
In closing, I loved it. Its is because of your blog I watched it.
Your reviews are impartial, honest, and brimming with wit.
Please continue in this manner.
Regards,
Big D

Thanks Big D! Of all Fulci's films that I've seen thus far, The Beyond is the most coherent and probably the one I like the most. I'm still looking to watch some earlier ones to get a full feeling for the man's work though.

This is my favorite Fulci film, and it is most true to Fulci's cinematic ambitions; films of pure imagination, that are like dreams. Making sense was not important to him. (See "Cat in the Brain".) To me this is like a horror "Fantasia". The music works, the atmosphere is compelling, and it's gory and creepy. I loved the ending. Most of his movies are not like this, they are more traditional b-movie fare. If you liked this one I would recommend "The Gates of Hell" which is very similar. The ending on that one is really inexplicable.