Paranormal Entity: The Feel Good Comedy of the Year. 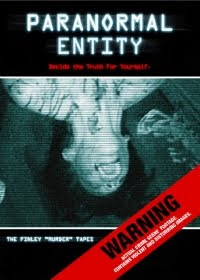 Paranormal Entity is the latest creation from the production company we all know and love- The Asylum. Most popular for their capitilizing on a blockbuster technique (perhaps you've heard of Snakes on a Train) Paranormal Entity is an attempt to mooch off Paranormal Activity and ends up being the same exact movie except with richer main characters.
The best part about Paranormal Entity is that everything that happened in Paranormal Activity is attempted and one upped. Although Micah and Katie had an abnormally nice apartment for one working person- they still could only afford one camera. The family in Paranormal Entity however, is able to put a camera in every single room! A camera on a tripod nonetheless. This makes it much easier for the demon to make his presence known. Which is a relief because I heard that during Paranormal Activity, the demon was constantly frustrated because his disturbances in the living room were never recorded- thank god he moved onto a richer and more annoying family. This family also has two ovens- which doesn't have anything to do with the movie but it's just more proof that they are rich and begs the question- why does anyone need two ovens? Seriously, I hate the concept of two ovens more than I hate that annoying commercial with those twin girls advertising two ovens.
The other hilarious part is that there is a horrid undertone of incest. The brother's first words to his scantily clad sister are something along the lines of blah blah here is my sister "isn't she pretty?" what brother says that? And then if that wasn't worse he later video tapes her "by mistake" coming out of the bathroom in her bra and underwear. And then of course in the last frame we get her naked body. Lovely. Which actually begs another very important question. Although the constant camera work of Micah was annoying in Paranormal Activity- most of the things that happened are caught at night while the camera is on the tripod. In Paranormal Entity, when the sister is screaming bloody murder and being raped by the devil- the brother freaks out and grabs the camera immediately. Really? Is that really your first impulse? I guess all beliveability goes out the window with these kinds of films.
The final hilarious thing that happened in relation to Paranormal Activity was instead of demon footprints in baby powder on the floor- this demon breaks open the father's urn- and uses his ashes to walk ON THE CEILING. He's so resourceful.
So pretty much- if you want a really good laugh and view this movie as more of a spoof rather than an actual attempt at a movie you will be OK- otherwise this one is best left alone.
Posted by Andre Dumas at 6:32 PM

Asylum movies are the best! I had heard about this one and was eager to check it out just cause it looks so horrendous, but that is part of the charm!

The only reason I can think someone would have two ovens is they really like scallop potatoes - to the point that they need to make multiple batches at once. That's my theory at least.

I'm going to watch Mega Shark VS Giant Octopus while I wait for my scallop potatoes.

You should watch this because I need to make sure that I'm not the only one thinking there was some gross incestual love lust for the sister. I'm pretty sure there was but I'm also a one track mind so you never know.

I agree with you completely. I started watching this movie with my girlfriend and in the very first scene I turned to her and said "I think this guy wants to DO his sister, what the hell" and also, I think he might have a touch of the ediple complex.