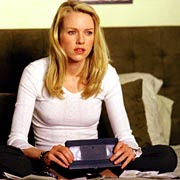 It's common knowledge that if you are in possession of a video tape that kills anyone who watches it in 7 days you should NOT leave it hanging around the house. Would you leave a loaded gun out in the open for your perfectly capable and smart son to find? Probably not. Heck,that kid is kind of old- I wouldn't even suggest leaving porn lying around the house. Not only does she leave the video hanging around she also decides to show it to her ex in hopes he can help. Bad move. STOP SHOWING PEOPLE YOU CARE ABOUT THE VIDEO TAPE!

To make matters worse- by viewing the tape, Rachel causes a horse to commit suicide on a boat. God! And possibly even worse than that- Rachel is stupid enough to believe that finding Samara's body is enough to put her at ease and stop the curse. Jesus Christ Rachel, even your oddly smart and weird son was wise enough to know that by doing that it will just makes things worse. So once again, Rachel is responsible for the death of a loved one- and then walks away casually before Noah's girlfriend enters the apartment.

Now granted, if she hadn't shown Noah the tape, Rachel may not have survived in the first place...but regardless she is an idiot. She still left the tape hanging around AND she killed a horse, plus she has no last name. 3 Strikes babe.
Posted by Andre Dumas at 11:30 AM

Who the hell uses VHS tapes anymore anyways? What an idiot! I would have calmed that horse down if I were on that boat...with a series of clicks and slight dance moves, the horse would have been so mesmerized by my mystique - that it would have just laid down and went night-night.

And she had that same dumbfounded look on her face for 99.9% of the time during the film. Puhlease!

hahaha SUCH an idiot. It's a tape that kills you what is there to figure out!?

God Matt why weren't you on the boat you could have saved a precious life.

I would have returned it to Blockbuster..hilarity would ensue

My favorite series continues - may there always be Rachel-like people in movies.

"Huh, that's strange. This curse says I'll die in seven days. Ah, I'm not too sure...maybe I'll test it out on someone else, just to see if they get it, too."

(And looking at my word verification, what the hell is a "whivesse"?)

In the extended cut doesn't it show Rachel and Aidan putting in on a shelf in Blockbuster? I guess they smartened up afterall!

Every Way to Go Moment is dedicated to you Dod! and I have no idea what a Whivesse is...I'm just surprised blogger verifications are somewhat readable sometimes I can't read them at all and I feel like a bad internet bot :(