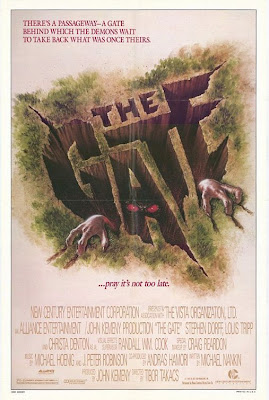 The Gate was one of my earliest horror movie memories. I believe Emmy Doomas and I stumbled upon it one brisk november morning and were utterly confused at the presence of little clay mud demons reeking havoc on some kids. The thing I always remembered the most was the saddest part of the movie-when the geeky/metal head kid Terry hallunicates his dead mother's return, and hugs her really tightly. Turns out- he had just been hugging the family's really old dog instead- squeezing it to death. Yeah. I probably cried back in the day- heck I even cried a little just now. The point is- this movie was an exciting jaunt down memory lane- and although it isn't quite scary anymore- it is wildly entertaining.
Glen is a young boy obsessed with rockets. After the big tree in his yard gets removed he and his aforementioned friend find a quartz rock they believe to valuable. Turns out- this is no ordinary rock. It's the key to opening the gates of hell! With the aid of a mystical spell, the sacrifice of the dog and a little spilling of blood- the gates of hell open and Glen, Terry and Glen's older sister Al are tormented by little demon's made out of mud.
First off- the little demon men are amazing. 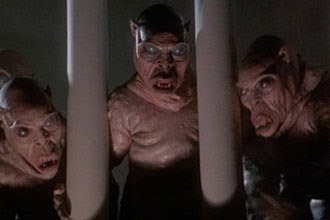 Imagine accidentally opening the gates to Hell and finding out the dreaded demons are these little shits? I mean come on- a few kicks and these guys are taken care of. But I suppose in large numbers they could be threatening but...mostly they are just really really funny.
The other best part about this movie is when Terry is in his room dancing to his metal record. He starts lip syncing the spoken part of the song- while wearing his rainbow bed sheet as a cloak. Oooh yes it IS amazing...how did you guess? I wish I had a clip but you'll just have to imagine it for yourself.
Despite the obvious cheese and hilarity that ensues throughout the movie- I was a bit taken aback by a part I definitely did not remember seeing as a child. I'm talking about when the scary story that Terry told Glen about the worker being buried in the walls of the house, manifests itself. A dead guy comes out of the wall and starts attacking! I was actually a little startled if you can believe it. The guy also looked like the Juggernaut from Th1r33n Ghosts (did I spell that right? I'm sick of these movies being all fancy and smart with their numbered titles. Yeah I'm talking to you Se7en!).
So while sometimes I got a little bored, I still maintain that this movie is all sorts of fun. A few more points of interest- when the boyfriend character takes the dead dog to the vet and it's just casually lying in the front seat! Apparently that guy has no soul. When an eye appears in Glen's hand. I guess the big demon wanted to keep an eye on him? And basically every face that Stephen Dorff makes. Did I mention Stephen Dorff plays Glen? He's actually a pretty cute kid- and his heart break over his sister's constant shafting is practically Oscar worthy.
I would say definitely don't expect to be blown away by this one. I would only recommend it if you had specific memories of it from your childhood- otherwise you're just going to be wishing that you were watching Sleepaway Camp instead.
Oh and for Christmas I would like this t-shirt. Thanks. 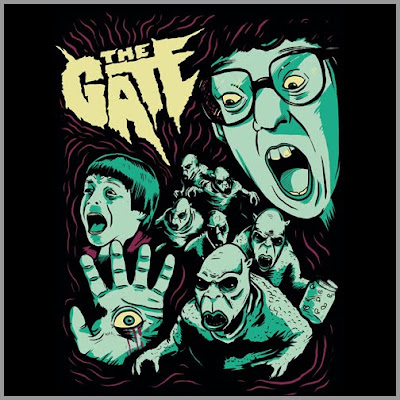 This movie is all kinds of awesome and I'm not just being biased because I'm a life long metalhead and ANY movie that includes metal, is instantly awesome. I loved his sidekick, nerdy punk rock patch wearing good friend. But I could never figure out why the big demon just kind of sat there when he fired off the rocket. The ending was kind of clunky. But then again, it is 80's horror. Definitely fun times.

Yesss Terry is all kinds of awesome. You are right about the ending though- what a lame excuse for the ultimate demon of the underworld!

This is a fun film. I've always enjoyed it.

It has a place in film history too. It came out the same weekend as the big budgeted Dustin Hoffman/Warren Beatty comedy Ishtar and beat it at the box office.

This is a childhood fav of mine too and I think outside of the cool, but dated stop motion animation, The Gate holds up pretty well.

You could almost consider it a kids horror film, one that was made at a time when kids and their movies had balls. A time when kids listened to metal and tried to summon Satan by playing records backwards!

The scene when the rents come home and the dad says "You've been bad!!!" is still mad scary and there is some great atmosphere in the movie too. Good stuff, The Gate is.

You are so right that part is nuts. For a brief second I was also relieved that his parents were home- and then ahhhhhh!

I remember this movie. I saw it a long time ago when I was really little on Joe Bob's Monster Vision. I thought it was a fun little flick. Did they make a second one? If they did I think I might have seen it as well, but have no idea what happened in it.

Oh my goodness. This might be the second or third horror movie I ever saw as a kid. I think it was the claymation monsters that freaked me out. As a kid, claymation was cute and cuddly, like those Christmas specials with Frosty and Rudolph. Then I saw this and flipped my wig.