Darkness Falls: Right. Add That Movie To My I'd Rather Die Than Watch That Again List. 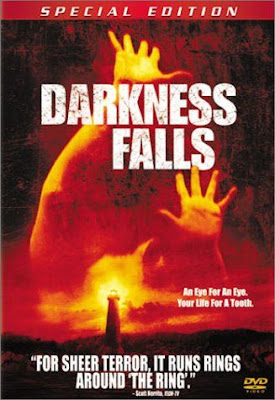 After sitting through Darkness Falls I would really enjoy it if I could have that hour and 20 minutes of my life back. What is this shit? I feel like someone just tied me down and forced me to watch 10 hours of Saved By the Bell the New Class. Completely and utterly pointless.
Let's start with the opening. A calming man's voice tells us the story of how the tooth fairy came into being. The guy told the story so sweetly I thought we were listening to a delightful story told by a nice little grandpa- or possibly the opening of a Disney movie. Then comes plot hole number one. This incredibly nice woman who gave children money for their teeth- gets burned. She can only go outside at night and wears a porcelain mask. Then 2 kids go missing. The town knew it was the woman and hung her??? ????? Ummm did I miss something? How did they know it was her? Because she only goes out at night? Yeah I guess. So now this tooth fairy woman seeks revenge by killing anyone that looks at her. Ok...
So fast forward to the present day- some kid loses his last tooth- catches a glimpse of the tooth fairy and then she kills his Mom. That's nice. Only- the Mom didn't look at the tooth fairy. So there goes that theory! After the Mom gets killed the police suspect it was the boy and send him off to a mental institution. Are there police investigations in this town? Possibly a little thing called evidence? There is no way the boy could ever have been held responsible for that. Oh and right before this all goes down the kid shares his first kiss with this girl he has a crush on. Which is another thing. This kid is probably about 12 maybe 13- and he's only losing his last baby tooth now?
Enough about this dumb plot. This movie just makes no sense at all. The characters are undeveloped, there is little to NO atmosphere created- we have no idea what the town of Darkness Falls is like because it's never even shown to us. The title girl has been fixated for her whole life on the kid she had her first kiss with when she was 12? Get outta town! Not to mention the acting is bad, the writing is atrocious and the plot holes are so numerous I lost count after 20 minutes. No character's actions are justified- they seem to be just doing things because it's in the script- and worst of all the movie relies entirely upon the scare tactic of a jolt. There is a surprising jolt probably every 5 minutes- and I'm not exaggerating. The ending was horiffically laughable- and FYI if you ever need to get rid of an evil tooth fair, just stick your arm in a lighthouse's broken flaming light and stick it in her face- call her a bitch too while you're at it.
Yikes. I can't believe I just watched that entire movie. I feel like I need to detox that heinousness from my head. Now for your enjoyment get a load of these killer lines.
Caitlin: It's okay, Michael. It's okay.
Michael: Caitlin, come on. It's safe.
Caitlin: Get out from under the bed. Come on, this is ridiculous.
Michael: No, you get under here.
Caitlin: Come on, Michael. Get out from under the bed. There's nothing to worry about.
Michael: Caitlin, No!
Caitlin: Okay, let's stay under the bed.
Nurse: What is wrong with you people! What's he doing here? I'm calling the police.
Kyle: Police are dead.
Caitlin: All of them?
Kyle: Pretty much.
Hahahahaha......ahahahaha....oh it just cracks me up!
Posted by Andre Dumas at 7:17 PM

I think the only reason I watched this was to see Emma Caulfield from Buffy the Vampire Slayer. Though it was kinda creepy when the tooth fairy lady was coming after him, crawling just outside the light. But yes, when you think and analyze it, the plot is sorely lacking.

Thanks for your review!

I thought that first opening scene was fairly effective. But then the movie devolves into complete and utter poop shortly thereafter.

I love how terrible the narration in the trailer is. It doesn't even make any sense.

Oh crap. I had repressed the memory of this one... UNTIL NOW! Sad to say I saw Darkness Falls in theaters. It was so awful. Ditto on the opening scene being truly frightening and then the rest of the movie tanked.