The Dead Zone: Life Lesson #2- When Your Life Is Endangered, Grab the Nearest Baby. 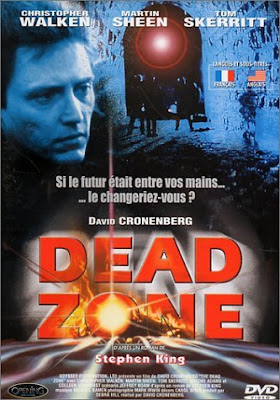 The Dead Zone is a movie that I feel often gets looked over especially in lieu of other great Stephen King adaptions like The Shining and Carrie. But I've come to tell you that I whole heartily enjoy The Dead Zone and always have a good cry and shout of anguish when Christopher Walken awakes to find his life is horribly changed.

After a terrible accident involving a giant milk truck- Christopher Walken enters a coma for 5 years. Upon waking up he finds out two very surprising things; the love of his life had moved on, gotten married and had a kid AND he can see people's past, present and future when he makes physical contact with them. Soon police want his power to track down murderers and lots of random people want him to track down lost cats. When all is said and done however Chris Walken just wants to live his life! This proves difficult when he discovers that the fate of the world could be in jeopardy unless he does something about it.
Now I think what most people talk about with this movie is the scissor scene- which is amazing. I am pretty confident in saying that I will be making this screen shot my beautiful blood shot of the week soon so keep a look out. 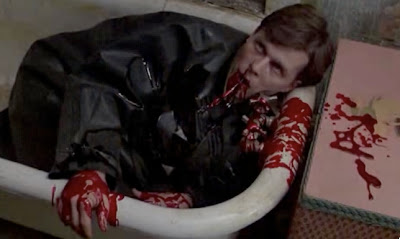 Just imagining doing that kind of suicide gives me the extreme willies. It's like...seriously? There's no gun laying around that you would rather use or something else not as extremely painful? It wasn't even an immediate death. Seeing him fidget and twitch afterwards was possibly worse than seeing him put his hands behind his head and open his mouth! Now, as much as I love this movie I think I am most invested and in love during the beginning and when Christopher Walken finally decides to help the police with the murder cases. After that I think it tends to lose it's luster which is perhaps why this movie often gets over looked.
Christopher Walken's turmoil however will never fail to amaze me. Imagine your entire life being changed in the matter of 10 seconds. Imagine the world continuing to progress around you while you lay comatose and unaffected for 5 years. The scene where he finds out his woman has moved on is especially heartbreaking and it's pretty obvious that broad wastes no time getting busy. Perhaps even more heartbreaking is when she comes over one night for a fun time of sex and dinner with her baby. And then once again when Christopher Walken opens his door one day to find his woman's husband passing out election flyers! It's a constant cycle of heart break and anguish- which makes the ending all the more powerful.
Now the ending. Hah. I know I can't be the only person who laughs out loud mercilessly when Martin Sheen grabs the baby to protect himself from the assassination attempt. Classic! Honestly what kind of person do you have to be to use a baby as a bullet proof vest...? So hilarious. While I wasn't a fan of Martin Sheen's acting ability- particularly the flash forward scene- this ending makes up for any mistake that he'll ever do in his entire life.
So when all is said and done I found many parts of this movie to be strikingly beautiful- the shot of the boys falling through the ice, and the blood splatter on the magazine. 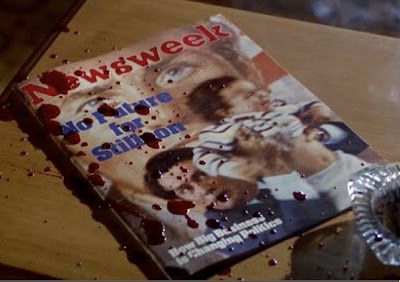 It's an interesting story and one that doesn't focus primarily on the horror aspect. While not overtly horrific, bloody and scary- the movie goes much deeper than that- serving up to us an often overlooked aspect of horror- wasted time, regret and other such human emotions that are hard to understand unless you've been through them yourself.
Posted by Andre Dumas at 8:51 AM

Love this movie!
I've been interested in checking out the TV series with Anthony Michael Hall that aired for a few years. Maybe it's still on, I have no idea.

The bullet would have gone through the baby anyway. Trust me.

I think the show is still happening...? Then again who knows these days!

You are speaking from personal experience aren't you Igloo Keeper???

I keep forgetting that David Cronenberg directed this. Whenever I think of his films I always leave this one off by mistake. But its his touch which I think makes this film work so well.