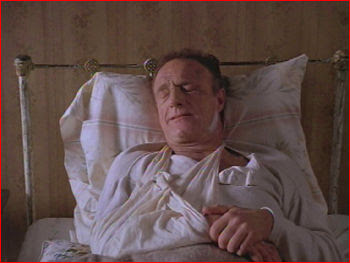 I feel really bad for Paul, I do. He wakes up in what he thinks is a safe and cozy home- when in actuality he is being held captive by a crazy obsessed fan who kind of looks like Kathy Bates. He gets his ankles broken so he cannot escape, is forced to burn his newest novel AND he has to pretend to like Annie Wilkes. Unfortunately, my sadness for Paul can only go so long before I realize that this whole thing was really all his fault.

Let's look at the facts. Paul Sheldon may be the only human being on the planet who HAS to drive to Colorado to get his writing done. Whoever thinks it's awesome to drive from New York to Colorado and back may be more of a nutter than Annie Wilkes. Paul's stupidity reaches even further than that however as he also decides that the best time to drive back to New York is when there is a blizzard. A blizzard in Colorado. Real smooth move. Due to this tragic error Paul almost dies and is then rescued by the mountain woman Annie. A real beast of a lady.
To put the icing on the cake- when Paul finally discovers a way to get out of his room- he explores the house, touches a figurine penguin and puts it back on the table facing the wrong way. For real? This lady has a pet pig, claims to base her entire life around a really lame romance novel, and is just an all around psychopath- I think she's going to notice if something seems out of whack! This ruins any future chance Paul has of escaping and even worse, makes it so Annie will never trust him to be alone. Way to go Paul. How hard would it have been to take a frickin plane you jackass. I hope your legs feel better soon.
Posted by Andre Dumas at 12:15 PM

Kathy Bates is pretty scary in this... but not as scary as she is in About Schmidt.

What an asshole! "Wahhh....I have to stay in bed all day and get fed and not have to work...wahhh!" I'm jealous!

Haha fo realz....Annie only got scary when he didn't cater to her every needs...how hard would it have been to just suck it up until he got well enough to run away? Gawd.

Yeah, it's not like she wanted to bone or anything! Then I would understand.